Dear Gareth: a letter to a wealthy man in denial

I received the following comment on the blog when discussing wealth taxation. I thought it was worth considering it in more depth and so reproduce it in full here:

Can you tell me where I have gone wrong.

I am 63 and did have a free university education. I then spent 7 years in the employment of others and then all the years since I was a self employed chartered accountant until I retired aged 59.

I am married and my wife has never done paid work but has been a housewife, mum to our two kids and a volunteer at the local citizens advice bureau.

My children have been educated by the state and both have been to uni, one when the fees were £3000 pa and the other when they were £9000 pa.

Neither I nor my wife have received any state benefits other than child allowance for our two kids and during my working lifetime, I estimate I have paid some £1 million in tax, NI, etc

My wife and I have inherited assets from deceased parents of some £1 million and now have total net assets of about £5 million. These assets have been accumulated from savings. We have never invested in the stock market or the property market. We have simply kept our savings in bank and building society accounts earning interest.

I am appalled by the following :-

1. That unless we gift assets or buy farms, our estate will attract IHT of some £1.6 million. This is a horrible little tax that penalises the moderately sucess, whilst the truelly rich have their trusts, offshore accounts, farms and schemes and pay nothing. IHT brings in very little revenue. We should follow other countries including USA and charge it on assets above £5 million or abolish it.
2. Labours wealth tax. Why should I pay? My wife and I have gone without to accumulate these assets out of post tax income. And will your wealth tax seek to include future pensions entitlement or pensions currently being drawn, as if the wealth tax us to be fair it should include all forms of wealth including pensions wealth.
3. That my wife and I are termed rentiers, for the paltry interest our savings receive.

So having outlined the above, again I ask you, where have I gone wrong as I am obviously a nasty capitalist according to you and Labour?

In reply I would say this.

Thanks for your comment. First, let me say you have done nothing wrong. I am not accusing you of being a nasty capitalist. And let me be clear, I do not comment for Labour, but I am not sure they're saying anything about you being nasty either. But I am suggesting that you have been considerably undertaxed.

You're an accountant, so let me work you through my logic. In saying so I hope you'll understand that I am having to make some big assumptions: you make reference to what was a working career of, I suspect, about 38 years and a total timescale of more than forty. Inflation has had an enormous impact over that period (being of broadly similar age, I know that). And of course tax rates and rules have changed a lot. What is more the information you give is a little generalised. But, using your data I think I can comment as I do below with any broad assumptions being unlikely to change the conclusions I reach.

First, as a good professional should, let me summarise the facts. You and your wife are worth £5 million. This sum, you say, is saved in cash. Of that £1 million was inherited. The rest you say you generated yourself. The figure appears to exclude pension wealth: you estimate the inheritance tax bill on this sum to be £1.6 million at the prevailing rate of 40%. That implies you think £4 million taxable, and this appears to take into account current likely exemptions available to you excluding any pension wealth, meaning you are likely to actually be worth rather more than you suggest. I return to this pension issue again, below. I note you do not refer to owing a house, but I presume you do; it would be rather surprising if you did not given your circumstances. I will make some guesses on that issue. Finally, you say you have paid about £1 million in tax and NI over your lifetime.

Now let me suggest some things that this implies. To have paid £1 million in tax implies a considerable income. A person earning around £100,000 will pay about 33% in tax and NI, overall. It's not absolute, of course, but HMRC agree. The ratio goes up to almost (but not quite) 40% at £150,000 of income. I'm using the lower figure; it favours you in what follows because what it means is that, give or take, your million of tax paid implies you earned at least £3 million of taxable income over your working life, ignoring pension contributions.

The rules have changed on those contributions over that period but I am guessing you paid in what you could because that's the typical accountant's mentality. This means roughly soaking 20% of your gross earnings, or on this basis some £750,000 of contribution, saving you maybe £300,000 in tax. If that sum invested grew (tax free) as it probably did you now have maybe another £1 million in pension wealth. I make the point because it shows how generous pension tax relief has been to those who could afford to contribute.

Let's get down to wealth though. First there are your parents to consider. You and your wife inherited a million from them. I am guessing roughly half each. And I am guessing you are not single children. This means that each estate was worth maybe £1.5 million to allow for inheritance tax of an earlier era. This means both sets of parents were in the upper echelons of wealth in the UK. This chart happens to come from the Mail, but is based on ONS data from a year or so ago. It will do. 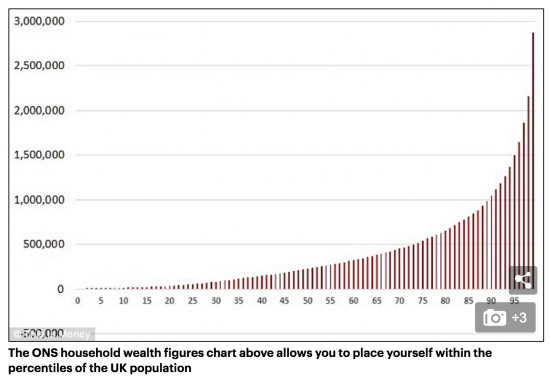 I only make the point to show you did not come from under-privileged backgrounds. I am, of course, aware of social mobility. And increasing house prices. Don't get me wrong. But at the very least your parents did well if they were upwardly mobile.

Then look at your own wealth. It's actually not on the chart because it is so exceptional. I make the point simply because you seem unaware of the fact, which I find odd.

But then let's get to some harder facts. First, I am bemused as to how you accumulated £4 million (I have excluded the inherited £1 million) out of your gross earnings of £3.75 million that left £2 million after tax and pension contributions. They are sums that do not sit comfortably together.

Now of course you bought a house: just the family home, you imply. In my lifetime property in London has increased in price maybe fifteen fold, based on my first flat. Perhaps you have ridden that wave with a move or two on the way. What I am having to wager is a significant part of your wealth is in your house. I am having to put it as high as £2.5 million, at least. But I bet you didn't actually part with more than £500,000 over the years to pay for that. Of course I am guessing, but this still means you actually lived on nothing at all (£3million net earnings after pensions, less £1 million tax and £500,000 mortgage payments and you would claim on this basis to still have £1.5 million left in the bank). At most it seems you lived off the interest on your savings. This seems unlikely, but we'd all like to know the secret Gareth.

Alternatively, you earned a great deal more than you suggest, and your ability to tot up your tax paid is a little on the shoddy side for an accountant.

But let's talk tax. You say inheritance tax. You say this penalises moderate success. Really? Is being well into the top 1% of wealth 'moderate' success?

And as an accountant you've always known about inheritance tax. So the existence of it did not actually disincentivise you, did it? Whatever you say on this is obviously wrong, isn't it?

And could it be that you want it only to be charged on estates over £5 million because that happens to be just what you have? There is no self interest in this, is there?

Incidentally, how would you then make it stick as you say it does not work for people richer than you? I am curious; please tell?

And then let's talk wealth tax, even if, as far as I know, Labour isn't. You say you have accumulated all your wealth out of post tax income. But actually you inherited £1 million, maybe £2 million is tax free capital gain on a house and your pension of maybe £1 million was from pre-tax income. So at least two thirds of your wealth has never been taxed. So your claim is not true, is it? And how the rest came out of post tax income defeats me, for reasons I have noted. However looked at, the wealth tax I propose, plus the capital gains tax charges on death on houses and other assets, are actually new, single taxes, aren't they?

And I think you'd agree they're fair. At least I hope you will. Because (I will exclude the inheritance but include the pension) you have apparently accumulated £5 million of wealth and lived on (and I am assuming that cost you at least £1 million, which would still have meant you saved an extraordinary half of your net income) or enjoyed total income and gains of £6 million in your life but have paid just £1 million in tax. That's pretty staggering, don't you think? It's an effective tax rate of 14% or thereabouts. Of course this excludes indirect taxes, but on your frugal lifestyle these would have been low. I would expect 30% or more. Add in the £1.6 billion you resent and the charge will still be just 37% (£2.6 billion on £7 billion in all). Note you still don't even get to a 40% tax rate that society think those earnings a bit over £40,000 a year should pay on their marginal earnings, and rather more if they're a student.

But apparently you resent that. Instead you want your children to inherit maybe £2.5 million each (I am assuming you can live off your pension based on past performance), instantly catapulting them well into the top 1% whatever they have done in their own lives.

So, some questions Gareth. First, why do you say this tax is a disincentive when it so obviously is not?

And why do you claim it is on earned and taxed income when so much of it very obviously is not?

What is more, why say your success is only modest when you're not at the top, but on any realistic assessment, not that far from it?

Come to that, why claim the rich don't pay and moan about the tax instead of seeking to reform it so that they do?

And then, why do you think your children should enjoy such a massive advantage in life when so many others have none? Do you really think only inheriting £1.6 million would leave them so poorly off that they have no hope of a good life? If so, why?

Come to that, why don't you want to make a fair contribution to the society from which you have done so well? What makes you think you don't need to do so?

Finally, why not do something more constructive with your savings?

I am sure others will have other questions. But those will do for now. And if you want to correct anything, please feel free to do so. I am not publishing your details, ever.