We had a debate yesterday at the Tax Justice Network conference (which was a stunningly good event) on whether tax justice campaigners should call for the corporation tax returns of large companies to be placed on public record, or not. Professor Prem Sikka proposed the idea, and I opposed it. I have already discussed why I think this a bad idea here, here and here. A little earlier than those three blogs I wrote one in February 2016 which is, I admit, the basis of what follows, although this blog heavily develops my thinking, which now goes much further than  I have gone before.

At the core of my argument is practicality. There are at least nine (and probably rather more) practical problems with publishing tax returns.

The first is corporation tax returns are for individual companies, and not groups. So, I would get an extremely partial view from any such publication and would then have to spend my life trying to create a group view. No one is going to have the resources to do that. This is because it is commonplace for a group to include hundreds of companies. Thousands of entities is also not unusual. Consolidated accounts were created to overcome the impossibility of creating any real understanding of what a group was doing that a review of the accounts of all these entities could, at best, provide. It seems absurd that we would now want to go back to the dark ages of accounting and ignore the existence of the group when asking for tax data.

Second, corporation tax returns can be massive documents: we would suffer information overload without getting nearer the truth. The number of people who could discern what was relevant information in this morass would be few and far between in the campaigning community and the resources to give them the time to find it would be even more scarce. Indeed, business might pile the volume on just to achieve that goal.

Third, I also think it likely that the boundary where commercial confidentiality will have been crossed and prejudiced might have been reached if such returns were published and whilst I am completely committed to accountability I think that can be sufficiently achieved with less information than these returns would provide.

Fourth, more importantly, I would suggest that some data in these returns would have to be redacted if the human rights of some people were not to be infringed. For example, if details of potential litigation was included in the disclosure, as was suggested, innocent parties may be wholly inappropriately named. When tax justice is moving into human rights this seems utterly inappropriate.

Fifth, the most interesting companies in many groups do not have corporation tax returns: tax havens do not require them. They have no need of them if there is no tax. So we would have a gaping hole in the data.

Sixth, no one country has the right to ask for this data for a whole group so what we would really learn is open to serious question as again the data would be very partial.

Seventh, if we did get a returns for many nations they would be in many languages. That would make dealing with them an interesting challenge.

Eighth, there is no standard or agreed way in which a tax return or the supporting tax computations need be submitted between countries. Assembling the data into a single format for one group would, then, be challenging. Comparing groups would be even harder and this data would only make much sense when compared. No one will have the budgets to do this.

And ninth, much of the data it was suggested that corporation tax returns might provide at present is not in them. So corporation tax returns do not provide deferred tax reconciliations. Nor do they disclose transfer mispricing. They may disclose TP adjustments, but not TP mispricing. In other words, the returns that are being requested aren’t even the ones that actually exist.

I could go on, but I have made my point. What all of this means is that we would get a partial, impossible unwieldy, view from corporation tax returns and that is very far from what I want. This is why accounting reform has to be the way forward, in my opinion. In other words, I am not saying I do not want more tax data, because I very clearly do. But I want that data in a way which meets very clear criteria. They are:

1. It must be available for the group as a whole, in total;

2. That group data must be reconciled back to individual country tax data in the country-by-country reports a company must produce for tax and, maybe quite soon, for accounting purposes;

3. The data must explain the variation between accounting and taxable profits;

4. The data must reconcile the tax account i.e. the difference between opening and closing tax liabilities. This rarely is achieved by just taking tax due and paid into account: there are often accounting adjustments and it is in these that much of the most useful data on tax planning is to be found;

5. It must cover deferred as well as current tax liabilities.

This is entirely possible. First large companies now must have country-by-country reporting data. In that case the basic tax information to achieve these goals has to exist: they have to know what their profits and tax liabilities by countries are. In that case the demand is not unreasonable.

Second, the point for many people of country-by-country reporting is to assess tax risk. I think it’s more than that, but if tax risk is to be understood this data is a logical extension of the disclosure already requested.

Third, put this data into accounts and it is a) consistent in format b) more comprehensive than tax return data as it includes tax accounting data as well and c) capable of collection in relatively easily understood  form and d) comparable, which are all the things tax return data is not. In other words, we can actually do something with it to change behaviour and make sure that the right amount of profit is taxed in the right place, at the right rate and at the right time, which is the only goal for having this information that I can legitimately see exists. 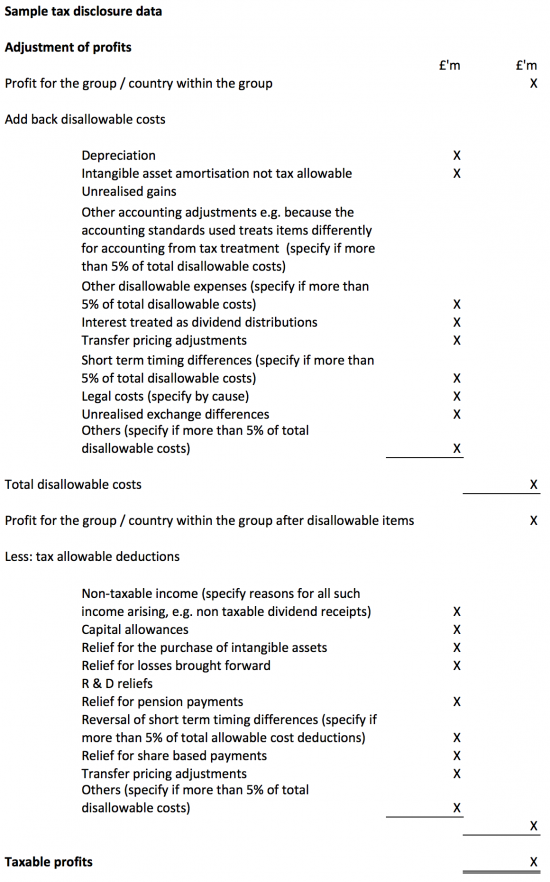 The reconciling items are not picked by chance: I have done extensive work on what companies actually say are the causes for this difference, but I will not, of course have covered everything. Note too I specify a materiality threshold of 5 per cent: I think that fair. There is always a trade off between needing to know and manageability that has to be recognised. Note that it is unlikely that any one reconciliation will include all these items.

Then there is a tax due reconciliation that checks whether tax is actually paid on profits at the expected rate that might look like this: 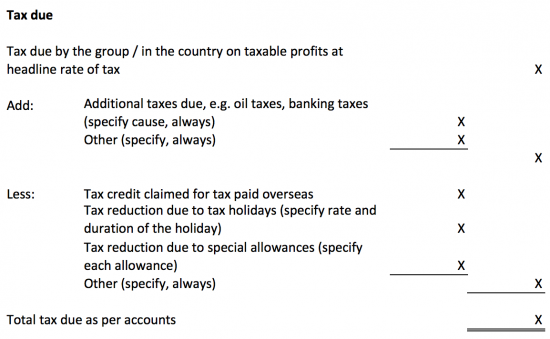 And after that there’s a check on that accounting for the liabilities owing that might be very telling and that is in this form: 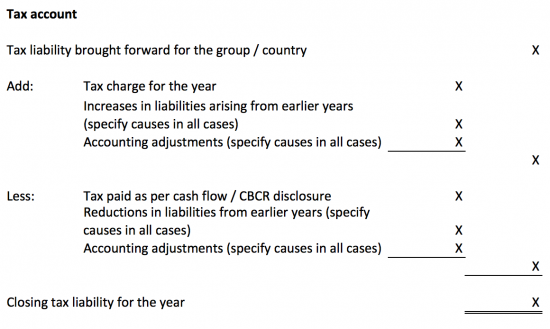 Note one thing that is very important. If at any time the group data does not match the aggregated company data then this too must be explained. Many of the most interesting tales to be told in tax avoidance will be found in that reconciliation. I am not suggesting a form for this reconciliation. What I am saying is that all reconciling items must have comprehensive numerical and narrative explanation.

After that there would be deferred tax accounting. I could produce tables for this but in practice I think existing disclosure would be sufficient subject to a number of vital changes so I am not showing tables but am instead suggesting the changes. These are:

1. Tax reconciliations in accounts must always separate deferred tax and current movements: the current practice that does not differentiate the two was probably designed to increase opacity in reporting and if it was not it achieves that goal and must go;

2. The deferred tax disclosure must be for the group and each country and they must reconcile, with that reconciliation being explained, if necessary for reasons noted above;

3. All deferred tax assets and liabilities must be disclosed separately unless they would be offset in practice;

4. Any item that explains more than five per cent of a deferred tax movement or balance must be separately disclosed for reasons already noted;

5. An estimate of when deferred tax assets and liabilities might give rise to cash flow consequences must be disclosed, with bands used being one, two, three to five, five to ten and then later years.

If I had this data then I could understand:

a. What a group’s taxable profit is and why it differs from its accounting profit both as a whole and by country;

b. I can access that data and use it, as well as compare it over time and with other companies;

c. I can see why it has or has not fulfilled its promise to pay;

d. I can see what the impact of current tax on the future might be;

e. I can see any tax accounting shenanigans;

f. Most importantly I can easily explain to others how to do this.

The alternative of tax returns will achieve none of this goals, as I explained yesterday, which is why I have and will oppose the demand that companies disclose their corporation tax returns but not the above information, because only one of these ideas makes accounting, taxation and campaigning sense.