Should the Big Four firms of accountants be as opaque as they are, and what should we do about it?

The GUE/NGL group in the EU parliament published a report by Saila Stausholm of Copenhagen Business School and myself this morning. The report, which is entitled 'The Big Four, a study in opacity' is available here.

The Big Four are, of course, the largest firms of auditors in the world. They are PWC, Deloitte, EY and KPMG. The summary of the report's findings says:

The research noted in this report, which is the first ever study of the issues it addresses, suggests that:

We suggest that the structure adopted by the Big Four firms of accountants, which at one level suggests the existence of a globally integrated firm and at another suggests that they are actually made up of numerous separate legal entities that are not under common ownership but which are only bound by contractual arrangements to operate common standards under a common name, has been adopted because it:

These advantages can be secured by these firms because the regulation of auditing and the supply of taxation services is devolved by the EU to member states even though, as this report shows, the supply of three services is dominated by what appear, for all practical purposes, to be multinational corporations.

We suggest that in an era where transparency is seen as fundamental to accountability it is inappropriate for the world’s leading auditors to be almost wholly opaque on their operations and to provide no effective reporting on their own activities when they play a fundamental role in the regulation of global capitalism.

To counter the risk that these structures impose on society we suggest that firms organised in this way:

I should note this report received financial support from the GUE/NGL group although my involvement was almost entirely funded by the Coffers (Combating Financial Fraud and Empowering Regulators) Horizon 2020 project in which I partake through City, University of London. 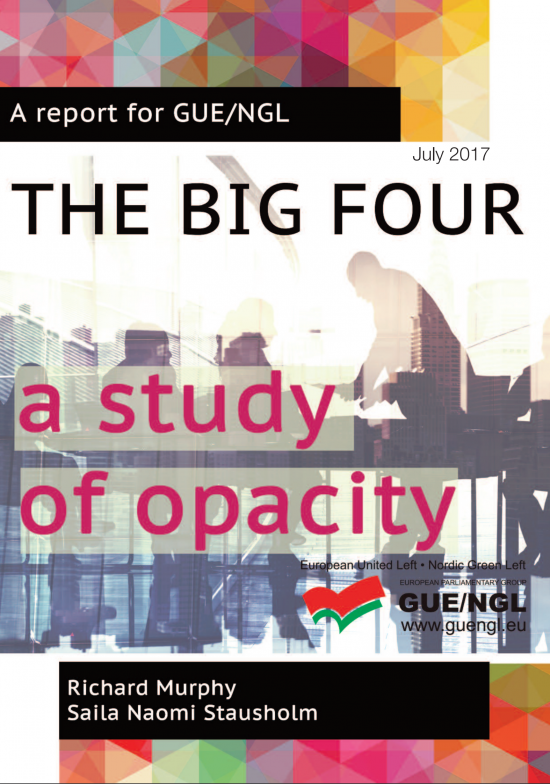