This picture is circulating on Twitter, summarising what it is claimed is Labour's anti-tax avoidance policy for the election: 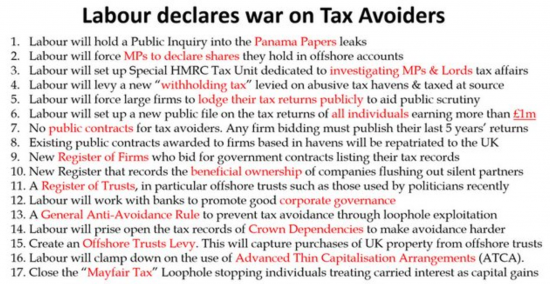 I have to say I hope this is not it. The big problem is what is not there. Start with this list:

I'd list all of these as higher priority than anything on the list above. I could probably add several more before I got to many of them.

The reasons are obvious. Of course country-by-country reporting we can all see is more important that tax returns no one can use.

And having full accounts is the pre-condition for any supplier vetting process but right now we don't have access to them.

And without Companies House and HMRC being properly resourced none of the above work.

I'm not saying this list is wrong. I'm saying that if that is the list the serious stuff is missing. And I am very much hoping it isn't.