On 3 April Baroness Williams of Trafford, who is a Home Office minister, claimed in the House of Lords that:

The UK is directly responsible for [its] O[verseas] T[erritories]’ and the C[rwon] D[ependencies]’ compliance with international obligations, including the European Convention on Human Rights. It is our responsibility in international â€‹law, as the overseas territories have no legal personality under international law. That was a key factor in the UK taking the rare step to legislate for the OTs on the issue of, for example, the decriminalisation of homosexuality. While I acknowledge the moral dimension of tackling criminal finances, the same responsibility does not exist for financial services policy, which is OT government responsibility.

The discussion arose during debate on an amendment to the Criminal Finances Bill which would impose on each of the British Overseas Territories (but not Gibraltar or the Crown Dependencies) the obligation to have a public register of the beneficial ownership of the companies that they register as a mechanism for tackling tax abuse. This amendment is being fiercely resisted by the UK government although it was only in 2014 that David Cameron said:

There is a way in which they do not change though, and that is with regard to facts. And the fact is that I think that what the Baroness said is wrong. Let me offer a number of reasons. I will use the British Virgin Islands as a case study: I think that in slightly differing ways the case is replicable in the case of the other territories.

Second, the question being asked is whether or not the responsibility for financial services policy is the responsibility of Westminster or the OT government. There is only one logical answer that I can see. Let me run through it. The preamble to the Constitution says: 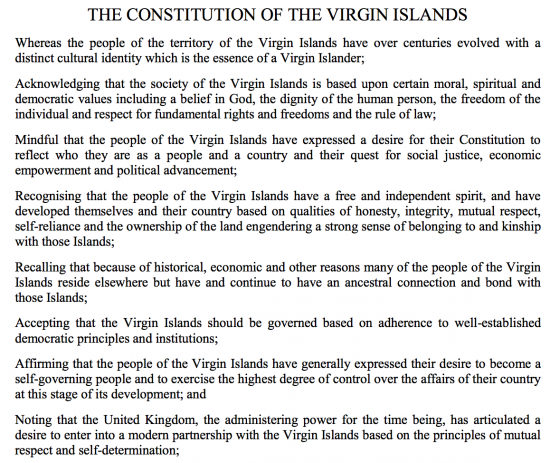 What I say then has to be within the spirit of the fact that the UK is the administering power whose job it it so to ensure that self government happens, as far as is possible, and that this self government supports social justice, economic empowerment and political advancement, all subject to the conditions actually noted. The first of those conditions to note is clause 46, which says:

In other words, Westminster rules in the name of the Queen and any power conferred on others is with the consent of Westminster, whose presence has tangible form in the person of the Governor, of whom the Constitution says: 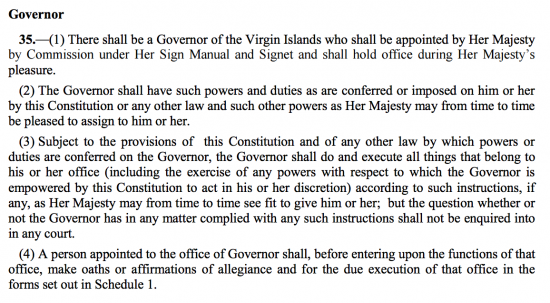 The Governor can then act as they see fit, and on instruction from Her Majesty, for which read Westminster. And just in case there is doubt as to the scope of that power to act, refer to the very last section of the Constitution, which says:

In other words, the Governor, if instructed by Her Majesty (or, in practice, one of her minsters) could, without a shadow of doubt make a law for the type of public registry of companies that David Cameron thought so important if they thought it appropriate to do so, and if they did the Constitution makes it absolutely clear that there is nothing the BVI could do to stop them.

I could rest my case there, but I know the counter-argument will come from clause 60, which says (I added the highlight): 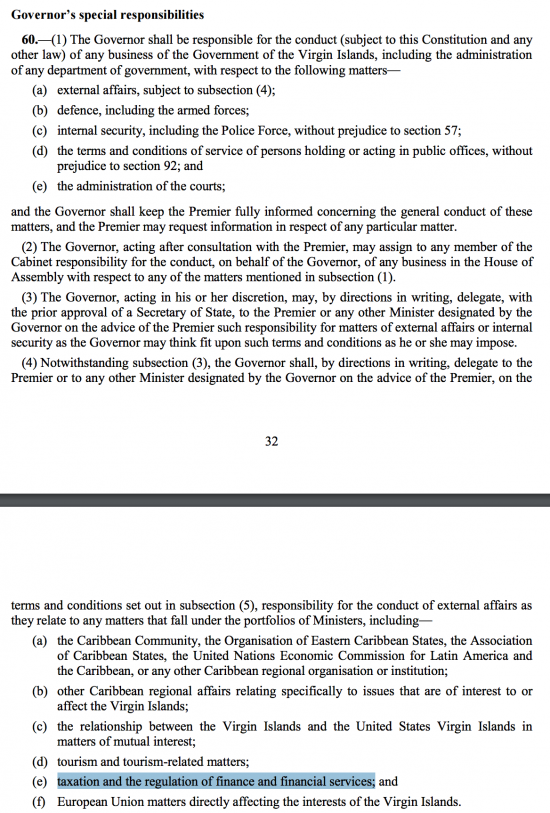 The position is clear: matters relating to taxation, the regulation of finance and financial services are all reserved powers for exercise by the Governor but can be delegated subject to conditions. These conditions are: 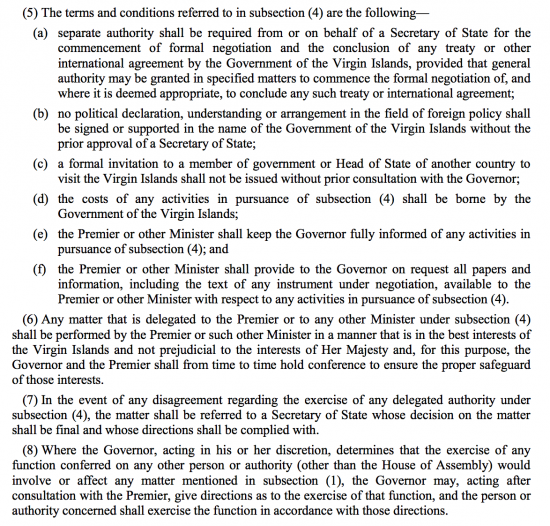 Note that the permission of Secretary's of State are required i.e. London has an unambiguous role. And note that the Governor can direct action under clause 8 if they so wish. That same section also makes clear that delegation once done is not permanent; it remains conditional.  In that case the fact that Westminster can act is now beyond doubt.

So, we come to the nub of the question, which is can the UK use this power to act to impose the requirement for a public registry of companies on the BVI? The answer is unambiguously yes under clause 119 of the Constitution: this reserves all powers to Westminster. Assuming good relations are to be retained with the local elected officials and that resort to section 119 is not desired is it also possible? I would argue that is also the case.

Facts alone support this. No one can pretend that BVI needs 417,000 companies, 1,614 mutual investment funds, 176 insurers or 211 banking and fiduciary operations to service a local population of 28,000 people. These entities exist, almost exclusively, for the benefit of people 'elsewhere' i.e. anywhere but the BVO. The BVI know this. The BVI Financial Services Commission says (I added the highlight): 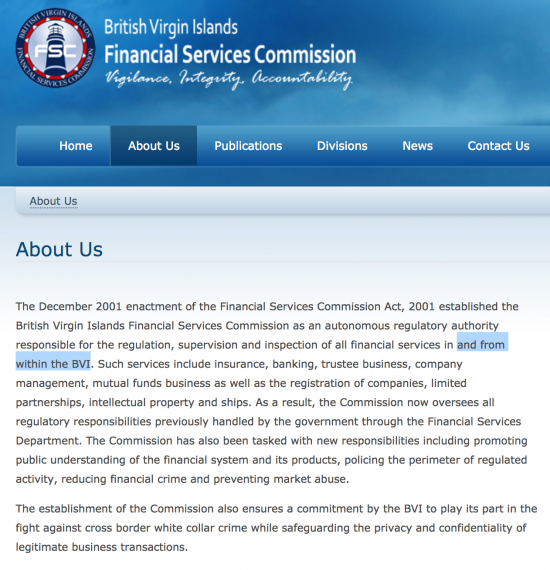 Note also the last paragraph and the reference to cross border issues. I am presuming no one in BVI really thinks, by the way, that the legitimate business transactions it arranges require absolute secrecy, because that is clearly contrary to the UK government view, as David Cameron's comments prove.

In that case can it be argued that the BVI company registry is purely a domestic issue as Baroness Williams implies by her comment, noted at the start of this post? I suggest that hers is an impossible interpretation. The facts prove it is not a domestic issue: this registry almost wholly exists to service companies that do not trade in the BVI. I would venture that maybe 98% of all current BVI companies have nothing to do with the place in reality, and I may be generous in saying so. In other words, the company registry the BVI operates must be within the Governor's reserved powers on external financial services regulation in section 60 of the Constitution and the Governor may, because this then is very clearly an issue to do with foreign relations, direct how that registry should be run if he thinks the local decision is prejudicial to Her Majesty's best interests. I would take David Cameron's comment as being the clearest indication of what those interests are. In other words, I have not a shadow of a doubt that the Governor, on the instruction of a Secretary of State, especially if they are mandated by an Act of Parliament, may impose such a measure.

Let me add two final thoughts though. First there is the issue of interpreting Her Majesty's interests. I refer as support evidence to a report of the National Audit Office from 2007 on the Overseas Territories, and managing the risks they create for the UK. In there they say:

Over the years the UK’s exposure to risk has been varied, including; contributing to the costs of natural disasters and of meeting various international obligations; funding liabilities and deficits in Territories’ public finances; and the need to bolster regulation in vital areas like transport safety and security. Other areas, such as the regulation of offshore financial services, clearly pose important and growing risks, though these have not yet resulted in direct costs to the UK.

In another part they say:

This section of the report examines the key risk areas which could impact on the UK, as identified by a National Audit Office survey of Territory Governors and governments, and the ways in which the UK and the Territories are attempting to address these risks, with varying degrees of success. The risk areas are: economic and fiscal trends; natural and man-made disasters; crime and justice; offshore financial services and transport safety and security.

To be blunt: the NAO thought that the risk from poor offshore financial services regulation that fails to meet acceptable standards falls to the UK. The UK has made clear it thinks public registries are the only acceptable standard in this area now; it follows it must protect the UK's interests by requiring them of the Overseas Territories. If not the interests of the Uk are prejudiced, as the NAO makes clear. This is not a domestic issue for the OTs in that case.

I stress, this argument has been structured around the BVI for convenience. I believe that the situation is consistent across the OTs: the BVI constitution is modern, dating from 2007, and so broadly reflects current thinking. I sincerely hope Baroness Williams might change her mind. I think it in Her Majesty's best interests (as defined for this purpose) that she does so.