As the FT reports this morning:

First, note the mockery this makes of local autonomy.

Third, note what I have already written about the injustice of this.

Then consider the alternatives. One of making council tax more progressive but when  it is appreciated that this is a central government decision the options become considerably more significant.

The funding required appears to be between £2.6 billion and £5 billion. This is a range of tax reliefs that could be altered to help raise that sum: 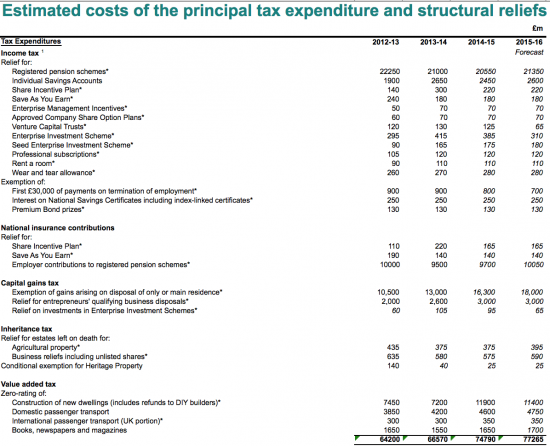 The data comes from HMRC. It understates the true cost of pension reliefs because tax paid by pensioners is offset against it and there is no economic justification for that.

Then let's remember the UK has a glut of savings at present.

And that tax reliefs for those with savings automatically means that the tax benefit goes to those who do not need it: if you can save you can meet your current need. The social care crisis is about meeting the needs of those who cannot do that.

This list also ignores the £3 billion or more cost of small business incorporations at present, as estimated by the OBR.

And it ignores that if corporation tax was at a sensible rate of at least 25% more than £10bn of extra revenue a year would be available and some of that £3 billion abuse would be prevented.

So, how to raise the money needed if not by council tax?

First, raise corporation tax to 23%. This would have no impact at all on UK employment, just as the cuts in it did not. It might raise £6 billion.

Second, cut higher rate pension relief. That would save between £8 billion and £10 billion.

Then eliminate ISA tax relief. What is that about? That's another £2.6 billion saved.

If you want more, get rid of VCTs. EIS, EMI and other such schemes none of which can be shown to have any real benefit.

And by now I have so over-funded social care we can help others as well.

I make the point deliberately.

There is no funding crisis for social care.

There is no need for regressive tax rises.

There is no need for this political stress.

The capacity to pay for the social care we need exists. It can be delivered without cost to economic well-being. It only requires willing to reduce some of the tax subsidies to the wealthiest in this country who do not need the reliefs they are given.

It only needs someone to say we are punishing those in need as a matter of choice.

It only needs a little courage. The courage that's needed to stand up to those who have and tell them they need to forego a bit for the sake of those who have not.

And that's what is in short supply.