Auditors are failing on a massive scale

The FT has a report this morning following on from Deloitte being fined $8 million for deficiencies in audit work it undertook in Brazil. As they note, it is hard to be surprised by such deficiencies. As they note

[I]n 2013 [the Public Company Accounting Oversight Board] found “Part 1 inspection findings” in 28 per cent of the Deloitte’s public company audits. A Part 1 finding means the auditor did not obtain reasonable assurance whether the financial statements were free of material misstatements. By comparison, Deloitte’s non-US affiliates were found to have Part 1 findings in 67 per cent of the audits inspected.

PwC had Part 1 findings in 32 per cent of reviewed audits compared with 46 per cent of non-US affiliates. 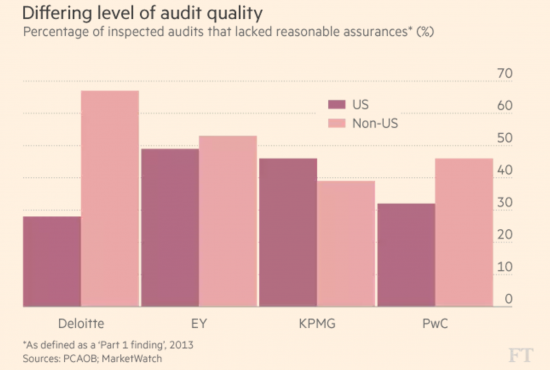 Let's not beat about the bush here: almost half of EY's audits were inadequate on this basis. Overall it looks like no one is doing much better than a third of audits being inadequate. As a measure of failure that takes some beating. And this does not look like a minor issue: the whole point of an audit is to obtain reasonable assurance as to whether the financial statements are free of material misstatements. If you have not done so then audits are worthless.

The Big Four accountants strut the world's economic stage as the ever present arbiters as to what is right in financial reporting, tax, and much else. But it would seem that they cannot deliver their most basic product effectively.

Three questions then. First, is it acceptable that they exist in their current form when that gives an impression of a global entity but when in reality they are split into a large number of separate legal entities to hide from the liability risks that these failures might give rise to?

Second, why if these firms cannot audit, as seems to be the case, are the still allowed to set auditing and financial reporting standards through bodies such as the International Financial Reporting Standards Foundation, which they dominate?

Third, shouldn't the idea that audit oversight can be shifted from government to quasi independent bodies like the Financial Reporting Council in the UK be challenged? Shouldn't auditing and accounting standards be a task for government once more?

And if not, in the face of this obvious failure by these firms (which is, admittedly US based), why not?