I have often made the point that it is impossible that UK tax abuse can be as low as HMRC claims. I have been asked to support that idea with some more arguments. The data here is for the UK, and comes from the UK Pink Book for 2015, published by the Office for National Statistics.

This is data on trade in goods: 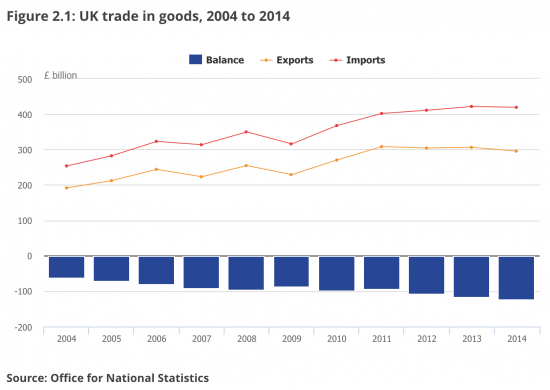 And this is equivalent data for services: 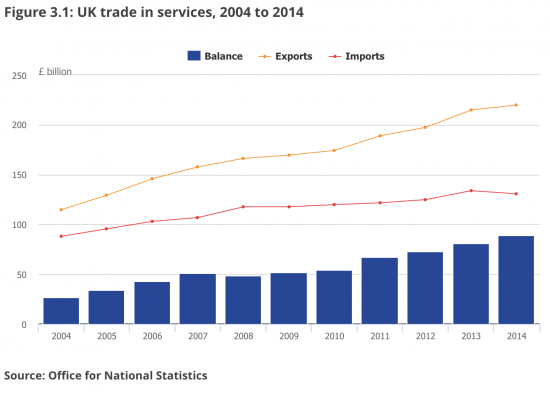 We know from the OECD that at least 60% of world trade is intra-group, that is between parties under common control where transfer pricing will take place.

If that is the case for the UK (and there is no reason to think why not) then about £640 billion of trade is intra-group and so subject to transfer pricing.

It is thought that HMRC employ 80 specialists to review the pricing of all this trade: that's about £8 billion each. It's not an encouraging statistic.

But the real question is about the chance that this pricing is wrong for profit shifting purposes.

Remember HMRC say that corporation tax avoidance (which is by far the biggest tax in play here) is £0.7 billion a year. Almost all of this is in large businesses. By no means all of that will relate to transfer pricing. It seems very unlikely that any loss arising from legal disputes will come from that cause. And the loss to corporate tax evasion, most of which will be by small business and is unlikely as a result to relate to transfer pricing and much more to the suppression of turnover, is £2.2 billion.

It would be staggering if the transfer pricing loss in all that is estimated at more than £1 billion, and I am probably being generous in that estimate.

That means that the gross mispricing (because the loss is tax due, not the actual price mis-stated) is, at an average rate of around 20% (which is close enough for these purposes: anything more accurate is spurious) may be £5 billion per annum.

In £640 billion of imports and exports that implies a transfer pricing error rate of 0.8%. And note, the gross value of mispricing giving rise to a tax loss can be compared to the gross value of trade here because the error will flow straight through from top to bottom line.

Let's put this in context. There are quite a lot of studies on normal human error rates. One on spreadsheeting (an incredibly common accounting tool) found 88% of spreadsheets on average over a large sample of studies included errors and that cell error rates were almost invariably over 1% and often very much higher. This fact alone would suggest an error rate of more than 0.8% would be likely in this area, although I accept that such errors might be normally distributed, although we cannot be sure.

And I am not claiming this is definitive proof, but in a human activity with  much more significant risk, it's been found that hospital consultants have a 5.9% prescribing error rate. Now that may, I think, over state risk because many people will not have prescriptions in the whole population, but what it still implies is that an error rate of 0.8% is extraordinarily small. I'd call it incredible. Or too good to be true.

So if the error rate is much higher than 0.8%, what is the chance that overall more transfer pricing abuse than that sum could easily be disguised amongst the human errors? I would rate it as very high indeed.

It's a very good reason to think that HMRC is understating the corporate tax gap.

It's also a very good reason to think that HMRC is under-resourced in the area. One person for every £8 billion of trade is another.

It also suggests that more work needs to be done to assess risk in this area.

And it suggests the yield from doing so might be well worth the effort.

It's an avenue I intend to explore further: take these comments as very tentative first review as a consequence.