One of the questions that came up in Edinburgh was from a man who was self employed and had engaged an accountant and was disappointed to find that all they seemed to want to do was sell him tax avoidance. As the audience member said, he did not want that: he was quite happy to pay the tax that was appropriately owing on the income that he had made. He wanted to know how to communicate this to his accountant.

I drew his attention to something I helped create a while ago and which has not, I admit, really flown as an idea. That is the Fair Tax Pledge.

I recommend that letter to anyone who wants to make their feelings clear to their accountant. The wording is as follows:

I have signed the Fair Tax Pledge, a copy of which is attached to this letter.

The change is appended to this letter in the form of a variation to your terms of engagement. As I understand it, the variation has two effects, which are as follows:

(a) you are now formally protected from liability to me in circumstances where complying with the Fair Tax Pledge means that I pay more tax, and

(b) my compliance with the Fair Tax Pledge and my public reputation as regards tax matters now fall within the scope of your professional duties towards me. 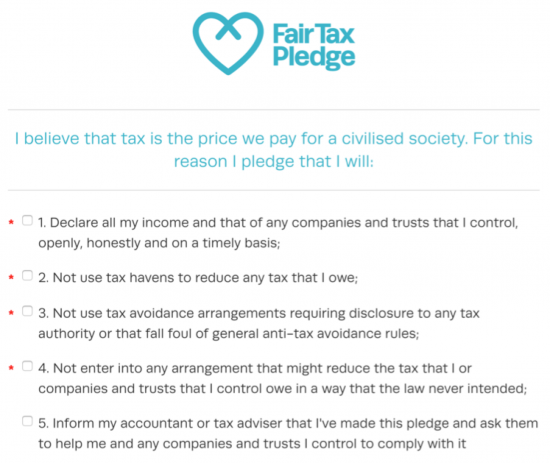 Your responsibilities will include assisting me in complying with the undertakings in the Fair Tax Pledge, and in particular (but without limitation) you will:

(a) assist me to declare all my income and that of any companies or trusts that I control, openly, honestly and on a timely basis, taking as guidance on how to do this the notes attached to the Fair Tax Pledge at www.fairtaxpledge.uk ;

(b) make sure that none of the arrangements that might require to be reported by me as a part of my tax disclosures are in any way explicitly linked to the tax havens noted in the Fair Tax Pledge; andÂ

(c) not advise me to make use of any arrangement that might require disclosure to HM Revenue & Customs under the Disclosure of Tax Avoidance Scheme regulations or that might fall foul of the General Anti-Abuse Rule or which might, in your opinion, be considered tax avoidance of the sort identified by HMRC in its publication â€˜Tempted by tax avoidance?â€™ (currently available at http://www.hmrc.gov.uk/avoidance/tempted.htm )

You will not be liable for any tax I may pay that could have been avoided but for actions or omissions in pursuance of the foregoing.

You acknowledge that failure to comply with the undertakings in the Fair Tax Pledge could result in non-financial forms of loss such as distress and damage to my reputation, and that your duty of care to me includes protecting me from such forms of loss by assisting me in complying with those undertakings.