What’s really going on with Nissan?

There is much coverage of Nissan's decision to keep car manufacturing in Sunderland in the press this morning.

Less noticed is a story by Tom Bergin at Reuters on the difficulty of assessing the impact of tariffs on Nissan. This is the P&L for Nissan's Sunderland operation as far as Tom and I can see: 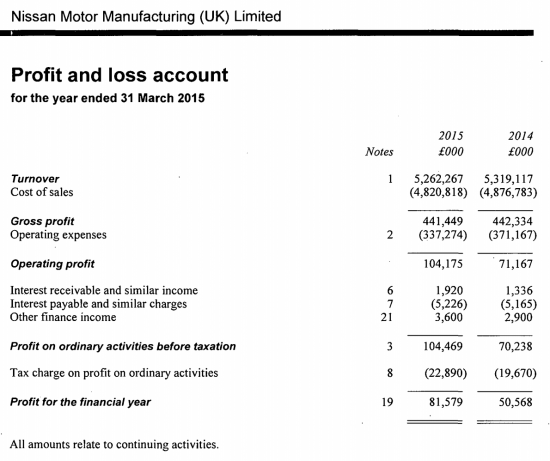 That's more than £5 billion of car sales. Then, however, read the notes to the accounts, which say:

In other words, not a single car from Sunderland is sold to anyone but Nissan in Switzerland. And not one goes to the EU, of which Switzerland is not, of course, a member: it is in the single market for goods (but not services) but is not in the EU.

So how does this impact on any deal? We don't know, but the suggestion is that there have been deals done to keep Nissan in the UK. I would suggest some questions are appropriate.

First, has the deal anything to do with tax? Is there an offer of a forward pricing agreement? If so, what right have ministers to offer such arrangements?

Second, is Switzerland a party to the deal? If so, how?

Third, is there a tariff compensation deal on offer? If so, what transfer prices are being used? Quite clearly the accounts noted above are an internal arrangement for Nissan and not the result of real market activity since all sales are internal. In that case what sale price has been accepted and to what scrutiny have the accounts been subjected?

Fourth, is there some opening being seen here with Switzerland where it becomes the entry point of choice for goods from the UK into Switzerland in a new era of tariffs? Might a new form of tax competition be opening?

Fifth, why is nothing 'on the record' as yet?

Sixth, who else will such deals be available to and why, or why not?

I want jobs in Sunderland, of course. But transparency is vital in the current environment. No one is suggesting Nissan are doing anything wrong, but the government needs to explain what is happening. And soon.