Who grew the economy most? It’s not as clear as you’d think

Using the same data sources that I mined a week ago to extract data on which party has borrowed the most when in power I have now had a look at who made the economy grow the most. The data is based on annual average GDP growth rates. This is the result: 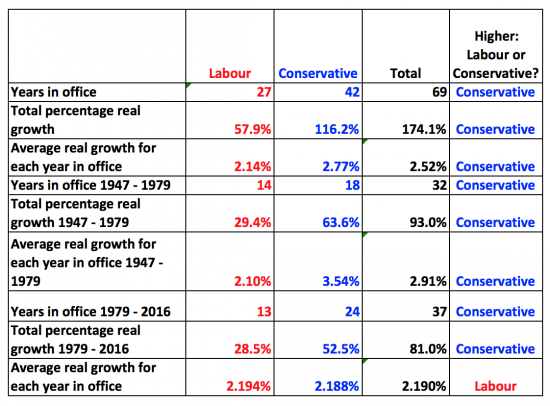 First note that six of the Conservative wins are just due to more years in office, which mean they were bound to have also delivered more growth overall. But then look at the average growth rates; these are what matter.

The Conservatives do win overall. That is unambiguous. But the story pre and post 1979 - which date marks the shift from the Keynesian to the neoliberal era - is what fascinates me. The Tory domination of the massive years of growth in the 1950s creates the enormous bias in its favour in the post war period. Macmillan was right: the Tories never had it so good.

Since 1979 it has been a different tale: I had to go to the third decimal place to differentiate the two, with Labour winning, just.  And taking out the financial crisis era makes Labour's win much more emphatic: the Conservative record in the 80s and 90 was really not that good.

The conclusion? If we look at the modern economic era the hegemony of neoliberalism has failed to differentiate the parties and the overall result has been worse for Britain. That's a sobering thought.