Reasons to be cheerful in the fight against inequality

I have always enjoyed the occasions when I have worked with Ben Phillips who is now Director of Policy, Research, Advocacy and Campaigns at  ActionAid International and also with Oxfam, Save the Children and others in the past. He deserves his role: his thinking is rooted in my opinion. In that case I was pleased to note a new blog from him on the Global Dashboard website. He begins by saying:

My job is to challenge the causes of poverty.

I like the confidence of that statement. I think I have the same job, done in a different way. Perhaps it's why we are kindred spirits.

That means that I spend a lot of time highlighting the gross injustices that I have witnessed people face. This can hamper my ability to be fun at parties. “What have you been up to?” a fellow party guest will ask, and I’ll reply “I’ve just come back from spending time with people living next to an open cast mine that has destroyed their health and ruined their land.” And they’ll say “Great music, isn’t it?”

I recognise that: you trying talking about tax justice at parties. I have developed other lines of conversation.

No one wants to be told that everything is going wrong. It’s just so damn depressing. I remember in our early courtship asking my now wife, who grew up in a village in South India, “how come everyone in the most popular Indian movies is so rich and sparkly?” She replied with the characteristic frankness born of experience: “Because we see desperate poverty every day, because we have lived it, no one wants to see any more of it.”

Civil society folks tend to respond to this conundrum in two ways. One group’s approach is to fib a little, to say that this or that global deal which just passed will transform the lives of billions. “That’s not true,” say the second group to the first, “how can you say it if it’s not true?” “You have to give people hope,” say the first group. “No,” say the second group, “the truth will set the people free, even if at first it pisses them off.” If it’s a choice between prozac and depression, it’s a crappy choice.

I know the conundrum. Google was a win this weekend. And a massive new problem, all at the same time. Ban addresses this; I will let him speak:

I think there might be several hope-giving truths in the fight against inequality. Here are three:

There’s no straight road to success in the fight against inequality. It will be amongst the hardest fights that civil society have ever taken on. It’s a big agenda that connects women’s rights, work, public services and tax, land, and climate change. It’s dependent on building up people’s power. And it takes on big vested interests. The backlash will get fiercer – but as feminist theory highlights, a backlash is an indicator of progress.

Back in 2013 I wrote, in a post for this site,  “It’s getting clearer and clearer we’re in an inequality crisis – so why am I optimistic? Since then the crisis has got worse, and yet I am more optimistic. This isn’t just because I’m keen to be a bit more fun at parties. It’s because some very important milestones have been passed.

At the UN meetings last year I had to suppress the cynical laughter I felt inside when an official called for “evidence-based excitement”. But on reflection I think he had a point.  As Arundhati Roy puts it, “Another world is not only possible, she is on her way. On a quiet day, I can hear her breathing.”

A really, really exciting, transformational, proposition is gaining traction. Step by step, vital preconditions for success are being realised. I never thought that we’d make so much progress so fast. We’ve got further along the road than I had ever dared imagine. We really do have reasons to be cheerful. I can be fun at parties, too.

And as Ben points out, to help achieve this goal on inequality a new alliance has been formed: 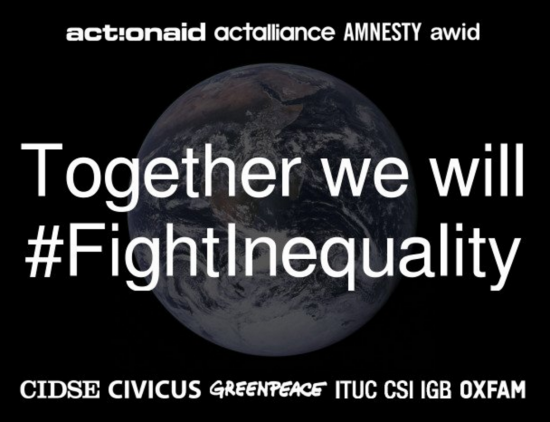 Unions, NGOs, environmentalists and civil society working together? That has to be good news. I warmly welcome this.

And good luck with it at parties Ben.