Labour to concentrate on tax ‘spends’. Here’s £82 billion to look at for starters

The Observer reports this morning that:

Labour will launch a detailed review of the multitude of tax breaks offered to Britain’s businesses, as the party seeks to craft a distinctive Corbynite economic policy, according to shadow chief secretary to the Treasury Seema Malhotra.

In an interview with the Observer, Malhotra said business reliefs, which allow companies to reduce how much they owe the taxman, should be subject to the same scrutiny as any other area of public spending.

“The big test really is to see whether economic policy is helping or hindering businesses and families; so that’s why we’ve started to look at the different types of incentives to invest business has,” she said. “A Labour-run Treasury would want to ensure that tax expenditures would be subject to the same rigorous analysis and review as other expenditure”.

I warmly welcome this move. Tax spending is a concept that many on the right deny exists. What tax spending represents is the money given away by not being collected as tax when incentives, allowances and reliefs are added to the tax system. In total they cost more than £100 billion a year. The list of the main reliefs is here.

Very clearly some of the main reliefs, such as personal allowances for most people, are not going to be played with in any significant way. But there are many reliefs that could be reduced or even eliminated with ease. Take this list for starters: 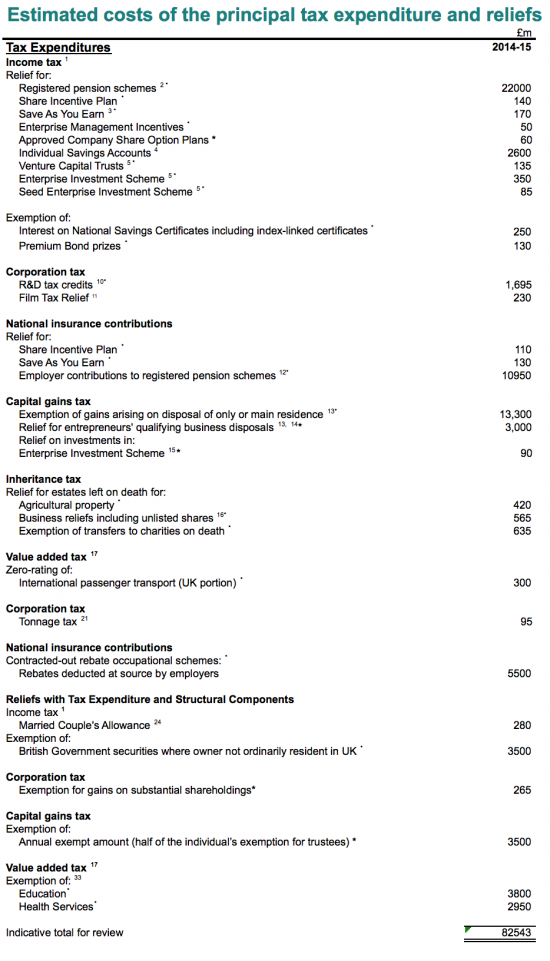 Now please do not get me wrong: I am not suggesting all these reliefs should be abolished. Some could be. I have already identified Entrepreneur's Relief  as ripe to be axed, and several other reliefs like it need to go in my opinion.

Many more of these reliefs could be modified. So, for example, some aspects of pension tax relief - which still costs far too much for the hopeless benefits provided by private funds in exchange - could be changed whilst the case for higher rate tax relief on gifts to charities disappeared years ago.

Looking at ISAs, capital gain tax allowances and domestic residence reliefs is more contentious but there is a trade off here. Bluntly, do we want old people on the streets, millions of families in poverty, a collapse in law and order, reduced security, hobbled defence forces, and the NHS inoperable because of the failure of care homes and declining education standards  or are some sacred cows of the tax system to be questioned instead?

There are tough questions to ask and heart searching to do but if Labour is to be serious these are questions it has to address.

I do hope to submit evidence to any such review.