If tax expenditure is Â£111 billion a year why is the government targeting tax credits?

Jolyon Maugham has published an excellent blog today in anticipation of the Comprehensive Spending Review, due later this month. I strongly recommend reading it in full.

If I can summarise what is a long and detailed piece, Jolyon argues that tax reliefs given by government - or tax expenditures as they are properly called, as they are in economic terms the exact equivalent of spending, amount to more than Â£111 billion a year and are remarkably little controlled.

What is more, as Jolyon argues, some of the spends, such as that onÂ the so-called Shares for Rights scheme, look to be deliberately mis-stated to hide their true purpose (in this case, bunging cash to private equity) or cost vastly more than anticipated, as my review ofÂ  entrepreneurâ€™s reliefÂ at a total cost of Â£2.77bn in 2013/14, delivering a tax saving of a staggering Â£600,000 (on average) to each of 3,000 people showed.

Jolyon, rightly in my view, argues that these decisions, and the failure to properly monitor and control these costs is deliberate, and political and should be of cross party concern. I wholeheartedly agree with him. Just start with this incomplete list of tax expenditure to think what could be done: 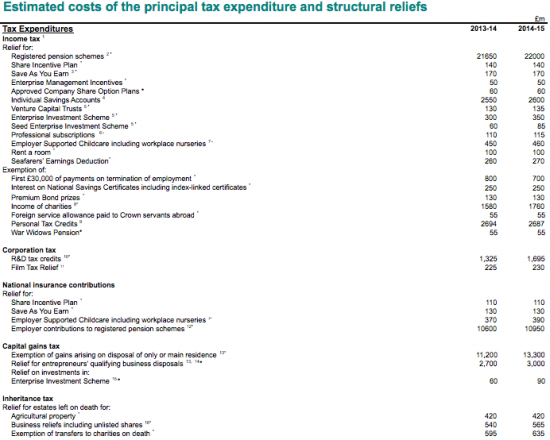 First, for example, ask why the savings of anybody already wealthy enough to save should be subsidised when millions live in poverty in this country. The subsidies in question easily exceed Â£35 billion a year, and that's not taking into account the reduced tax rates at which capital gains are charged.

And should there be capital allowances on as wide a basis as currently provided when it is not clear they are providing any real incentive for business to invest?

I could go on. But let me make four suggestions now.

First, if the Comprehensive Spending Review does not consider all these spends then let's be clear that it will not live up to its name.

Second, let's demand that review, and if the government will not do it, let's publish an alternative report.

Third, let's demand an Office for Tax Responsibility Â to monitor such issues, as I have long demanded.

And last, let's put sunset clauses into all allowances and reliefs requiring that they be re-approved by parliament and that such reapproval can only happen when a comprehensive review of the outcome against expectation and a cost-benefit analysis is provided to justify doing so.