I was talking with Danny Blanchflower about quantitative easing today. He drew my attention to this letter (of which I reproduce part): 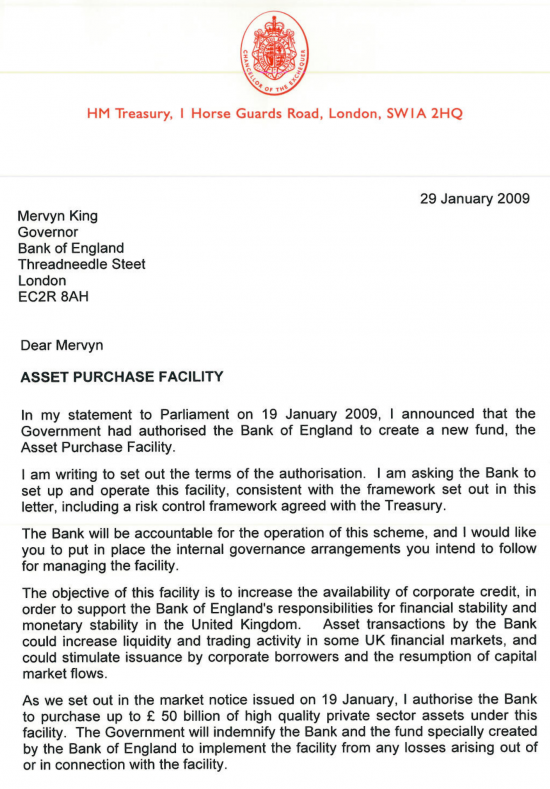 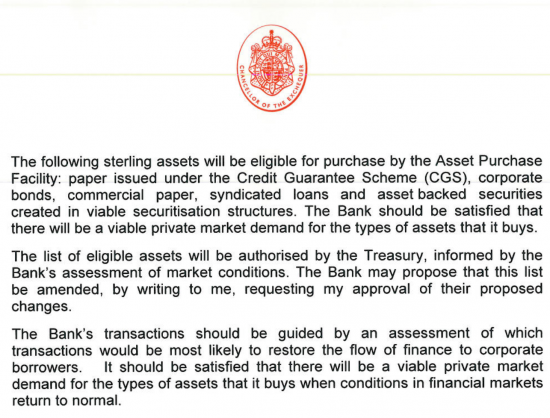 I gather that this authorisation was repeated by George Osborne and is still in force.

So, let's cut to the quick. First, there was no reason why QE had to buy gilts. In fact £1 billion was used for other assets, and then Mervyn King brought a halt to that (I understand). But quite specifically, that was the Bank not following Treasury guidelines.

Second, note the Treasury was firmly in command of this process, authorising what could be purchased. The Bank could merely suggest.

Third, the Bank was indemnified for losses.

Fourth, the condition was that the assets had to be capable of sale at investment grade in normal times (which we still do not have: we still have 0.5% interest rates with no sign of a change in prospect now, I suggest).

So, first of all, unless you can argue that the bonds issued by a new National Investment Bank would not carry investment grade status now I think we can say three further things.

First, People's Quantitative Easing is not only legal, it has already (subject to National Investment Bank bonds being sold by tender into the market in the first instance, as I have always said is necessary) already been authorised.

Third, when and if the market returns to whatever normal might now be defined to be because these bonds will still exist (I have never said otherwise, although people like Chris Giles in the FT claimed I had presuming (probably in accounting ignorance)  that de facto cancelation by consolidation is the same is legal cancellation, which it is not) then they could still be sold, which is the Treasury requirement for acceptability.

So, all the legal and structural arguments for People's Quantitative Easing fall away: it is already authorised and legal.

So now the question is, why not do it? We still have no effective monetary policy in the UK and no chance of it in the foreseeable future: what might be considered 'normal interest rates' are likely to be a very long way off. In that case what is the reason for not doing QE assuming, as is true that we have a) unemployment b) low productivity and so c) under-usage of capacity which only needs the availability of credit (which is, note, the reason for QE) to bring it into use?

And why not also do it when a) we have increased market uncertainty b) a threat to export growth as a result of the China crash and c) a significant new risk of deflation which we need to do at all costs?

And finally, right across the country - in every constituency - I guarantee projects that are 'shovel ready' can be found. If I put out the appeal to local authorities and health authorities I think we can be sure they could line up with:

And if you want to be really broad minded:

Why not do all that now, when it is legal, authorised and could be managed by a new Nation al Investment Bank under existing BoE authority from the Treasury right now.

I really want to know why not.