It is time to name the benefits cap for what it is: economic cleansing

This map shows the impact of the new, lower, benefits cap in the UK: 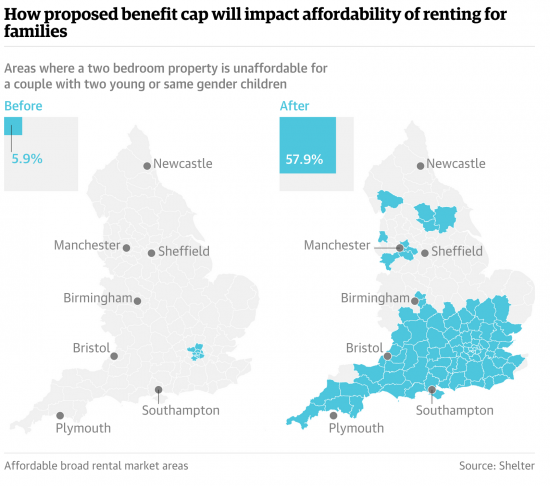 What it makes clear, based on data from Shelter and published in the Guardian, is that large swathes of southern England, the south west, south east and south midlands plus some larger cities families suffering the misfortune of unemployment or disability will not be able to live.

Ut is estimated that 100,000 families may have to move as a result.

I think this has to be named for what it is. This is economic cleansing. And I find it deeply repugnant. It was bad enough when it impacted limited areas in London. Now it threatens the fabric of lives with devastating potential results.

I find it staggering that such a policy has been proposed my a major political party.

I find it astonishing that it has been put to the House of Commons.

And I am beyond words because it will, no doubt, become law.

And please do not justify these actions by saying 'the majority of people want this so politicians must go along with it'. First that does not attribute blame for the careful creation of the justifying the narrative, which has been deliberately nurtured.

Second, I suspect that this claim may still also be true of the death penalty

Third,  regimes across the world that have been widely condemned for their actions have also won local popular support as a result of similar exercise in narrative control.

In that case this support is no defence for an act that is morally unjustifiable, and I do not care who disagrees with me saying so.