The Jubilee Debt Campaign has a long tradition in fighting on a single issue that has caused and reinforced a great deal of poverty, and in the process created major financial instability. This is, of course, debt in its various forms.

As the say (in the following, edited, extract) in a new report entitled The New Debt Trap:

Debt crises have become dramatically more frequent across the world since the deregulation of lending and global financial flows in the 1970s. An underlying cause of the most recent global financial crisis, which began in 2008, was the rise in inequality and the concentration of wealth. This made more people and countries more dependent on debt, and increased the amount of money going into speculation on risky financial assets.

Increasing inequality reduces economic growth as higher income groups spend a smaller proportion of their income on goods and services than middle- and low-earners.

Meanwhile, the rich were putting more of their growing share of national income into speculative lending and risky financial investments, in search of higher returns.

The total net debts2 owed by debtor countries, both by their public and private sectors, which are not covered by corresponding assets owned by those countries, have risen from $11.3 trillion in 2011 to $13.8 trillion in 2014. We predict that in 2015 they will increase further to $14.7 trillion.

Overall, net debts owed by debtor countries will therefore have increased by 30% — $3.4 trillion — in four years.

This increase in debts between countries is being driven by the largest economies. Of the world’s ten largest economies, eight have sought to recover from the 2008 financial crisis by either borrowing or lending more, thereby further entrenching the imbalances in the global economy. The US, UK, France, India and Italy have all borrowed even more from the rest of the world. Germany, Japan and Russia have all increased their lending to other countries.

As part of this increase in global debt levels, there is also a boom in lending to impoverished countries, particularly the most impoverished — those called ‘low-income’ by the World Bank. Foreign loans to low-income country governments trebled between 2008 and 2013, driven by more ‘aid’ being provided as loans — including through international financial institutions, new lenders such as China, and private speculators searching overseas for higher returns because of low interest rates in Western countries.

22 countries are already in debt crisis; a further 71 could be soon.

In this report, by looking at countries’ total net debt (public and private sectors), future projected government debt payments, and the ongoing income deficit (or surplus) countries have with the rest of the world, we have identified countries either in, or at risk of, new debt crises.

I have no debt that Jubilee Debt are right to highlight this issue. These are the countries that they believe are at risk. Note the UK amongst them: 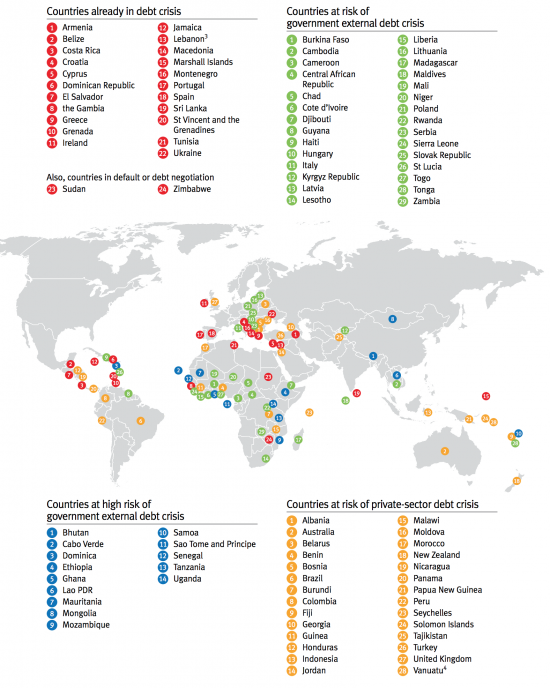 It's worth reading that report.