George Osborne will announce tonight that he wishes to deliver perpetual government surpluses. I have already discussed some of the social implications; this blog is about whether he can actually achieve that or not.

My answer is that such a policy, that would take economics back to the logic of the Victorian era, is not achievable in the 21st century. The logic is simple, and straightforward, but needs explanation and is based on what is called sectoral balancing. I have discussed this issue at length before, many times, so let me link to another person's explanation instead. This is Frances Coppola's version, and has the merit of showing this is something the Office for Budget responsibility knows all about.

The principle is simple and is that there are just four sectors in the economy. They are:

Now as a matter of fact the surpluses and deficits run by these groups must arithmetically balance in monetary terms, because double entry does work: every debit does indeed have a credit.

So if we use the same letters C, G, I and E to represent the net savings or borrowings of these groups in a period then:

So, if consumers borrow someone else must lend. And if business invests then someone else must run a surplus. Most people have problems with the net trade part of this: it works by saying that if we net import i.e. do not pay for all we acquire, then people from overseas save here and if we net export then we save overseas.

Now, let's rearrange the equation and G, which is the expression for government surplus or deficit is expressed as:

The government surplus or deficit is, in other words, the opposite of what is happening with consumer debt, business borrowing to fund investment and the net trade balance.

What G (or the government surplus or deficit) is not is an independent variable that can be controlled in isolation. It is dependent upon what happens elsewhere in the economy and what the equation makes clear is that if the government deficit is to fall then either consumers must borrow more  or business must invest more or net exporting must improve. Those are the only options unless the attempts to cut the deficit, G, are reflected in real falls in GDP, i.e. the net total sum of activity in the economy is reduced because the attempt to cut G reduces the money available to spend and we get recession.

So what chance is there that because George Osborne has announced he is to cut the deficit for good that we will see more consumer sending (and so borrowing), more business investment (and so borrowing) and more net exports?

I think we can dismiss the export issue straight away as a source of a solution. Europe and the US remain mired in slow growth economies and nothing we do will change that. Nor can I see China sweeping more of our exports soon. They seem more intent on buying our assets which is a process helped by our current trade deficit with them. So any salvation here looks unlikely.

That leaves consumers and business needing to borrow more if Osborne's attempts to cut the deficit are to work.

As a matter of fact consumers are saving less in the UK than they were: savings as a proportion reached over 8% in 2009 having become almost non-existent in 2007. They then fell back to 5.5% in 2013 but in the 2015 budget (page 108) the OBR forecasts savings to rise to 7.3% of income by 2016 and then stabilise at about that level. In other words, if people are, overall, going to increase their saving they are in net terms going to reduce their borrowing (the two are the inverse of each other). So there is no chance of deficit reduction coming from this source; the opposite is in fact likely according to this version of OBR thinking.

Is business investment the solution? According to the OBR it is. This is their forecast on all four sectors until 2020: 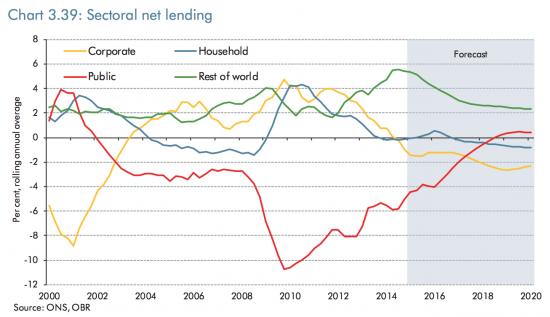 Bizarrely, despite saying the consumer savings ratio will rise they forecast more consumer borrowing. That's a hard position to maintain. Only one of those statements can be true. Let's ignore that for now.

Instead let's note that the OBR faith that exports are going to boom to reduce overseas net saving here is, politely, bizarre.

But so too is their expectation on business borrowing where large businesses (who do most investment) are stubbornly sitting on massive cash piles running to hundreds of billions because, to be blunt they can think of nothing to do with it because consumers are not spending and their other big customer, the government, is saying it's cutting its budgets.

In that case I do not think there is any chance at all that the chart will work out anywhere near what the OBR forecast.

Worse, in fact, the commitment to cut the deficit will actually make it much harder to achieve this goal. People will save more as they will know that the sate will not provide them with a safety net so they must provide one themselves. This will reduce borrowing and increase saving, the exact opposite of what the government wants to happen if the deficit is to be cut. And, in the light of this, business will not invest because both consumers and government will be retrenching and overseas markets are not looking good.

So the deficit will continue, come what may, and whatever Osborne says tonight.

Except it will be worse than that, because George Osborne is making another mistake. He thinks he can cut to a surplus when the reality is that the only way to a surplus is to get consumers to borrow more, business to invest more and overseas to buy more of what we make. These options of cut or promote activity are not alternatives, as the basic formula shows. If you want to cut the deficit you cannot cut to achieve that goal: you can only stimulate what is not happening. Osborne has simply got his logic wrong.

But in that case what will happen if he does cut? The answer is threefold. First, he will stimulate the exact reverse reactions from those he wants as already explored here, and the deficit would actually get worse.

Second, he will steadily withdraw money from the economy - because that's what reducing government spending does. The result is GDP will fall. Incrased saving and a lack of investment will compound that.

And because he will have reduced cash from the economy when there is no lending to make good the shortfall (and remember it is only bank lending and government spending that can create money) he will trigger a liquidity crisis that could also trigger banking problems, a fall in GDP or a crash, or all three.