There was an article in the Telegraph a couple of days ago in which it was claimed:

As it happens, companies are paying an increasing amount of tax. Even more significantly, they are doing so as the rate of corporation tax falls. There are two things that we can learn from that. The corporate sector is paying its “fair share”, and arguably more than it really should. And if lower rates generate more cash for the Government, perhaps we should think about bringing them down further.

Along the way the article had a serious go at all those campaigning on corporate taxes - saying we have got most of our claims wrong. There was also a side swipe at the Fair Tax Mark.

But the claim made is wrong. This diagram, admittedly prepared just over a year ago, shows why: 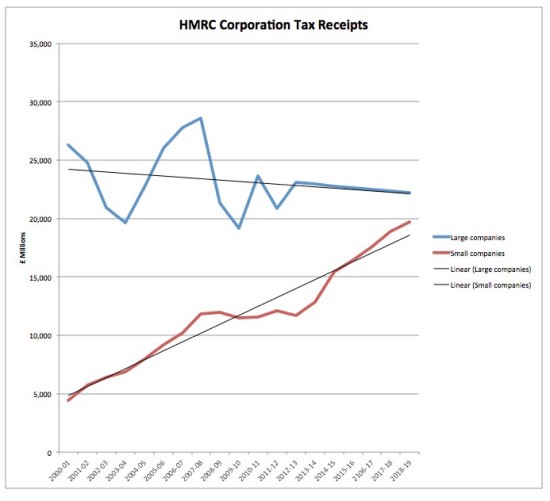 What the corporation tax data for the UK clearly shows is that there has been a fall in large company tax payments and an increase in small company payments.

Small company payments are rising simply because of the growth in the number of such companies. The actual sum paid by each is falling slightly, and I have, of course, argued that a great many (hundreds of thousands a year) do not pay what they owe, but the fact is that sheer numbers are pushing their contribution up. In contrast the contribution by large companies is falling significantly (more so when inflation is taken into account) and will in 2015 be more than £8 billion less than was predicted in the June 2010 budget.

There are three reasons for that. The first is the enormous cut in the late company tax rate - from 28% to 20%. There has been no Laffer effect, of course.

The second is the massive range of new opportunities that have been provided for tax avoidance by this government, including excluding all income earned outside the UK form tax, the patent box and offshore treasury allowances.

Third, there is a cut in staff at HMRC. Like it or not, that is bound to have an impact, as is an HMRC Board dominated by big business.

But what is also shocking is that the share of profit has been going up in the economy and still there is a fall in revenue form big business.

The Telegraph is wrong: big business corporate tax abuse remains a massive issue and we are right to campaign on it.