No winner might be what the UK’s democracy needs

There will be no winner in this year’s general election. We all know that. Every political party barring the Labour and Conservative parties know, of course, that they will not. And in truth neither of those parties think they can win either, but just won’t admit it. That, though, is their problem and not ours. In that case we are entitled to imagine what will happen come May 8th.

The Guardian provides some insight into how the likely arithmetic of this works: 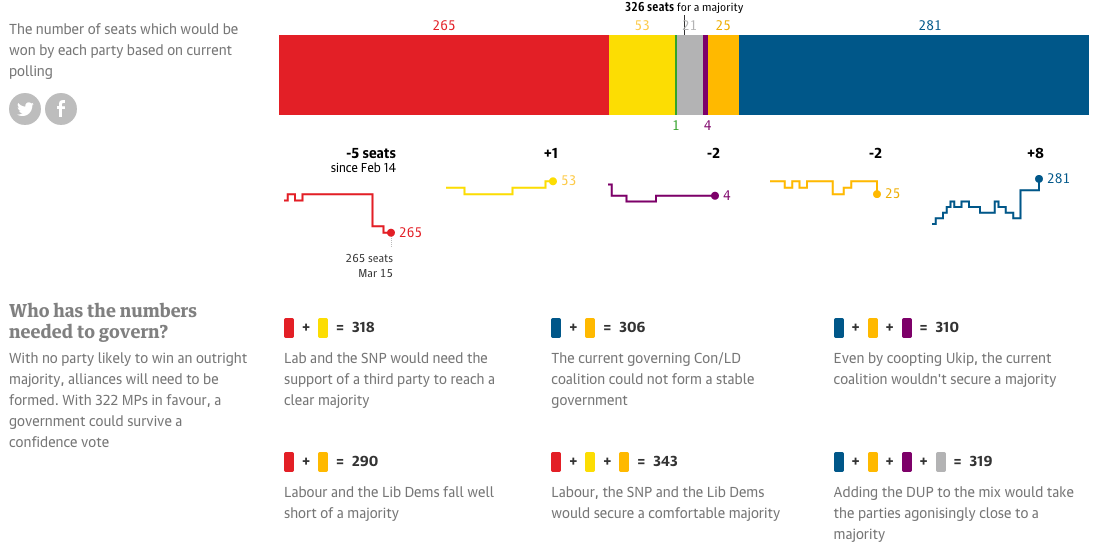 If anything like this forecast happens then it’s not just that no party will win; it’s the case that no two parties can win. And that really does take us into territory where we have never been before.

So I want to out forward an idea that’s just a little counter cultural to those used to two or three party politics and the ‘Westminster system’ of whipping MPs to toe lines so that rarely, if ever, does an MP ever have much influence with their vote. And of the outcomes the Guardian notes possible fundamentally changes that and I want to suggest the possibility that it is possible (I stress possible, but definitely not certain) that this might be quite a good thing. The reason for saying so is the potentially contentious possibility that in such a situation democracy might flourish.

Suddenly what different parties and MPs think on an issue will matter.

So too will debate. People will be open to persuasion. That might be especially true if there is no formal coalition and who governs will be the party with the best chance of delivering a Queen’s Speech, which based on the arithmetic on offer cannot be guaranteed to be the Conservatives even though if they have the most seats they have the first chance of trying, which is an option which might also be open to a Conservative / Liberal coalition as incumbents (but not, as far as I can see, to the Conservatives alone in that situation).

But suppose they cannot win support for a Queen’s Speech?

And suppose Labour can?

First, a party which is not the largest in parliament could govern. And it would do so only because it could win the argument for its policies not just with those who supported it, but those who did not.

The point is, that this does at least look possible and takes us into territory the Coalition never went, and that would be a good thing. Because the Conservatives and Lib Dems agreed a programme that was after two years very obviously bankrupt or time expired and has since then wasted a massive opportunity to do good by doing, at best, nothing at all and at worst some harm. That, as a process, was a failure. No one can agree a legislative programme for five years in a few days.

In that case so called confidence and supply agreements that keep one or more parties in continual negotiation with a minority government might just be what we need. Debate will remain fresh. Options will remain open. Negotiation on best outcomes will have to take place across parliament. And, hopefully, best arguments for best policies might win.

You might accuse me of being hopelessly optimistic, and I would have to agree that such a possibility exists. But then, look at where we are and candidly look at where we have been. Something has to be better than what we have had for some time past. It’s just possible that against all the odds this election might deliver what we need right now. That might sound bizarre, but it has, at least to be possible. I will live in hope.