Some time ago I was invited to write on tax for the CBI's Great Business Debate and the resulting blog was published yesterday. I stress, it did take a very long time to come out: I wrote the blog sometime in November and I can only presume it took until late January for a sufficient response to be written, which seemed to be a pre-condition of its publication.

And what a response it is. Written by the CBI’s chief economist, Rain Newton-Smith, most is pure PR waffle confirming the good news that the CBI believes in motherhood and apple pie. I am sure many people will be relieved.

What the CBI also does do is confirm its commitment to its  tax principles, which suggest that companies explain their tax charges which sounds great until you realise they are opposed to public country-by-country reporting and the Fair Tax Mark, both of which seek to achieve this goal. So candidly, those principles can be dismissed as nonsense.

As can two more things be so dismissed, the first of which is the CBI’s ‘golden rule’ for economic management. They raised this issue because I argued in my piece that:

Tax is about raising money. But let’s be clear: this exercise is reclamation of what the government has already spent into the economy through its commitment to fulfill a democratic mandate. Spending always comes first and tax comes second.

There are three points of explanation to note on this last issue. First, governments can, and always have, spent before they have tax revenues precisely because they can create new money. Second, that spending is not predicated on having tax revenues available. The quantitative easing programme, and the effective cancellation of government debt that it has given rise to proves that: deficit spending can be met without taxation. And third, this makes clear that there is a fundamental relationship between tax and monetary policy as well as tax and fiscal policy. In that case to treat tax as an administrative, technical or micro-economic issue, as the CBI very largely seems to do, is to fundamentally misunderstand its nature and significance. This is bound to lead to the promotion of policies that are politically and economically implausible, at best, which is why some of the CBI’s contributions to tax debate are not only bound to be ignored but have to be ignored.

In response to this the CBI says:

Our ‘sustainable fiscal rule’, as set out in our report Our Future Public Services — A Challenge for Us All, is consistent with this — that, once the Government has balanced the books, public spending should not exceed tax revenues over the economic cycle. This allows tax and spending to play a role in times of economic difficulty, so long as the Government support is then paid for once the economy recovers. The alternative is ever higher public debt and ever higher debt interest payments which leave less space in the government budget for spending on much more productive things like science, education and health.

Let me just consider that claim, because it is economically quite incredible. What the CBI are saying is that if there is government borrowing at any time then it is the duty of the government that incurred it, or any subsequent one, to  then not only restore a balanced budget but actually run a surplus until such time as all the debt incurred has been repaid.

The logic is, of course, that of microeconomics and the corner shop in which situation if an overdraft has been incurred then it must, of course, be repaid. But there is an obvious problem with this logic, because whilst the corner shop cannot print its own money any government with a central bank can. The UK has been in that position since 1692.

The following graph shows the pattern of  government borrowing as a proportion of GDP from 1692 until the present day: 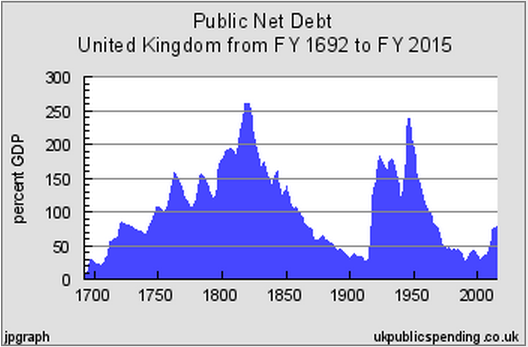 You may note one curious fact about that graph and it is that not once, not ever, has the debt disappeared. Governments have, over a period of 323 years, never followed the CBI’s advice. They have never felt the need to repay the sums they have borrowed, and there is good reason for that: they have not needed to do so.

One reason for that is that there has always been a strong demand for UK government debt (which is hardly surprising: it’s one of the safest things anyone can invest in).

The second is that having realised it could always sell its debt no government has ever seen the reason why it should punish an economy by unnecessarily withdrawing government spending on the supply of goods and services that the government, and their varied electorates, have considered necessary, and affordable, partly, at least because of that ongoing demand for government debt that they were more than happy to meet.

But now the CBI says all that is of no consequence: 323 years of experience that balancing the books at the end of each economic cycle is not necessary should be ignored, they say,  and we must do it in future. It’s faintly ludicrous that they say that, but let me explain why. It’s because, as is glaringly obvious, we have never had a debt crisis as a result of not doing so, and despite the fact that debt as a proportion of GDP  has been vastly higher than it is now and that interest has formed a far larger part of the UK budget than it does at present as a consequence  we have also not, again, ever had a government funding crisis as a result. To put it another way, the CBI’s claim that failure to comply with its rule will lead to all sorts of problems is simply untrue; it has never happened, and candidly, won't happen. Which means the CBI is wrong.

As they are also fundamentally wrong on the issue of what I call green quantitative easing. The CBI is apparently relaxed about £375 billion of funding being issued by the government to support banks. But it says of QE funding being used to create jobs, to create real investment and to boost the well being of its members who actually undertake useful economic activity:

Claims that the Bank of England’s ‘quantitative easing’ programme (printing money to buy Government bonds) provides a get-out-of-jail for unfunded public spending are misguided and risks ducking the tough but necessary decisions to reduce the deficit.

This is just misleading: such action is not ducking the tough decisions needed to reduce the deficit. It does instead create the necessary liquidity within the economy to create the economic activity that does in fact provide the only hope that the books might ever be balanced. In macroeconomics you can never cut your way to a balanced budget simply because putting people out of work does not mean you do not need to feed them anymore in the macro economy, but you do now have to feed them despite the fact you are asking them to do nothing in exchange. This is the simple error of logic that the CBI, fixated as it is with micro economics that assumes that people once sacked disappear from view, makes.

Or does it? Can the CBI really be so uninformed on economics, and so lacking in intellectual capacity that it really cannot see that its arguments make no sense at all? Or is it simply promoting nonsense to support its view that the state must be shrunk for purely dogmatic reasons that, I am sure they believe will increase the power of capital? I regret to say that I think the second of these two options is likely to be in play here, and that's worrying, to ay the least.