We know inequality matters: what we do about it now we know matters more

The OECD has published a new report that says it is now quite sure that inequality matters and has a significant impact on the economic growth that a company enjoys. There are reports on what they have to say in the Guardian and FT this morning, and a slide summary of their findings is available here.

There will, I know, be academics wedded to the neoliberal model who will say that this research, like that from the IMF which produced broadly similar findings earlier this year,  is either inconclusive or wrong, and no doubt they will trawl their way through the minutiae of the data to try make their case. I have little time for that: the fact is that statistically based findings such as these can at most support observable hypotheses formed by astute observers of what is actually happening in society. Research of this type does not create reality: it confirms what is known and as such is inherently normative whoever does it and whatever the outcome is. That does not mean it is not useful: it is, and can be persuasive, but usually to those inclined to believe it by pre0disposition.

So does it matter? Yes, of course it does. There are many reasons for saying so. First, this represents part of a major change in world leading organisations on this issue. They should have realised long ago from the type of astute observation I describe that trickle down economics, where increasing inequality was tolerated as all are supposedly better off as a result, does not work for a very wide variety of reasons, but the reality is that this conclusion is only now being reached and the fact that it is overdue does not mean it is not welcome.

Second, the bluntness of the OECD conclusion, and the fact that they recognise it is normative in this slide, which is part of the presentation made, is important: 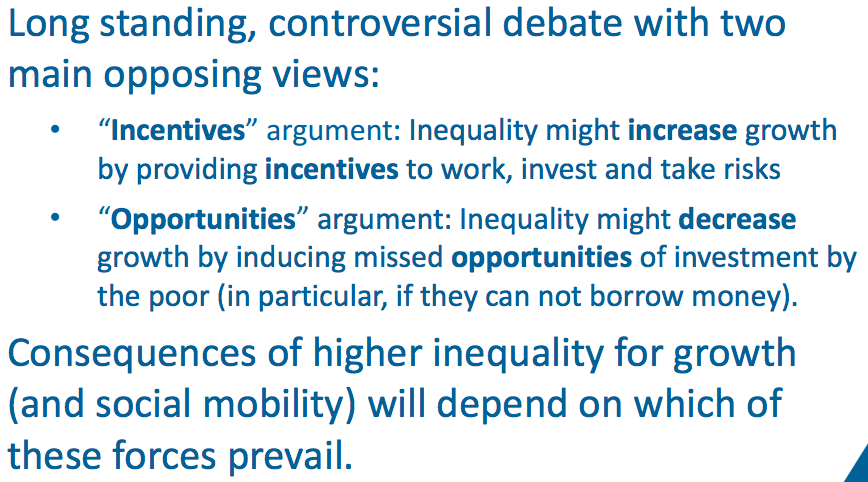 What that slide effectively says is that policy implications flow from the judgements made on this issue and that they have significant impacts on the societies in which they prevail. So, in many societies, such as the UK, where there have been significant increases in inequality over the last 30 years or so, not only have their been significant growth impacts as a result (with the UK losing maybe 7% of current GDP as a failure to tackle this issue over the last 30 years) but the decision to pursue policies that focus on "incentives" has had major implications.

This philosophy is seen throughout the current government's attitude towards what it calls welfare and I call social security: in itself a major difference of significance to those in receipt of the payment. Welfare is treated as if a handout to those not willing to take initiative for themselves; social security is the provision of support to those in need at a time when through no fault of their own they need it. Philosophically that difference is enormous.

In practice that is seen in the narrative of the welfare "scrounger' who stays in bed whilst hard working families go to work. And it's seen in practice in such policies such as the bedroom tax, sanctioning and welfare caps, all of which are meant to provide the incentive to make people want to work.

The difficulty within this narrative is that, as the OECD  has now noted, getting work is an impossibility in practice if there are very real structural impediments to work which neoliberal economists assume do not exist. I stress, they really do assume that such impediments are not real and that is because in their economic modelling they do, automatically and almost without thinking about it assume all have equal access to capital, markets and knowledge for example. Because they are so used to making these somewhat ludicrous assumptions in their theoretical work it never occurs to them to notice that in the real world they do not hold true.

Fundamentally, this is what the OECD is saying: it is suggesting that the neoliberal model is wrong. It s saying that not just for the very poorest in society (the bottom 10% of income earners) but for all in the bottom half of the income profile (and remember, this is a concentrated and who in the UK earn less than about £21,000) there is a very real problem of access to the means to change a person's situation.

They make clear that reallocation of wealth and resources through tax can work, but a progressive tax system is not enough. The impediments to work are structural. This, they say, is most obvious in education and training and so in the opportunity to gain well paid employment, or employment at all. Fundamentally, many people are being excluded from the market for work and for prosperity and that creates a significant cost.

But in that case, as is widely noted, trickle down economics does not work because at best that only reallocates a small part of wealth through the spending the rich promote. What is need is an interventionist state to both reallocate wealth via taxation and, at least as importantly, to overcome the market failure created by inability to access education and training because the resources needed to access them are not available to many people.

That is free education. And it is regulated training. And it is support to those participating in them. This means supporting sixth formers where appropriate; student grants; ending tuition fees; scrapping the hideously unfair student loan repayment arrangements that are blighting many lives, causing untold social and economic harm, and it means funding the facilities that can provide education appropriately as if education were a social good and not a product.

And it means a narrative on social security that sees it as a force for social good.

Perhaps most of all it means ending stories that suggest the poor can't cook with the recognition that far too many are prevented from cooking for reasons that are no fault of their own, starting from a lack of infrastructure (cookers, fridges, freezers and more), or access to the means (yes: fuel is dear), a lack of training and a lack of access to the market (try buying for one: without serious capacity to store food it can be pretty uneconomic) and so on, and on. Pointing a finger is inadequate: only offering solutions is acceptable.

That's what I think the OECD is saying and our government falls a very long way short of what is required by this standard. Worse, it backs the wrong narrative and that is beginning to look like straight prejudice now, which, of course, it is.