Why personal tax statements are so wildly inaccurate

The government has announced overnight that the first people in the UK to get what they call Personal Tax Statements will be sent them today.

I have no problem with anyone sending a person a summary of how much tax and national insurance they have paid in a year. But the fact is, of course, that the vast majority of people do already get such a statement. If they are in regular PAYE employment that is called their P60. If they are not in such employment and have multiple sources of income or self employed earnings then they will already receive a summary of the tax that they owe attached to which is usually a payslip asking for payment. I make both points for a good reason. There is no additional tax information in here for anyone. The first conclusion with regard to these statements is, then, that they have to represent the most monumental waste of money and duplication of effort, both things this government is supposedly intent on eliminating.

The second conclusion to offer is that there is a lot of tax information missing from the statements. The statements only refer to income tax and national insurance and yet people also pay VAT, alcohol, fuel and alcohol taxes, council taxes, and all sorts of other duties and charges. None of these are referred to on the statement. The figures are, therefore, hopelessly wrong as to total taxes paid by a person. The impression that the tax mainly paid by the better off is the only tax that matters is being deliberately reinforced by these statements. That is deliberate political misrepresentation of the truth.

But the errors do not end there. Third, it would seem that the government assumes that all spending is paid for by taxpayers when estimating the sums paid. But that is not true. Some is paid for by borrowing. It is not clear how that is allowed for in the estimates made and nor is it made clear that this is the case and that people benefit from that fact. Again, This is straightforward political misrepresentation. The fact that people seriously benefit from an unbalanced budget is not being made clear.

Then, fourthly, there are also what look like some errors in the figures for government spending.  For example, the figure for debt interest used in the calculations is the gross cost as far as I can see, but that ignores the fact that well over 25% of all interest paid is returned straight to the government as a result of the QE programme and so is not an expense at all. Nowhere is this made clear and so the cost of the deficit is seriously overstated  in these tax statements.

Then  there is the fact that data has been restated for the purposes of this exercise, which is a fact that the government admits. The best estimate of spending in 2013/14, which is the year to which these estimates relate is as follows, from budget data:

I compared this, apparently acceptable analysis (which has been used for some years now) with he analysis implicit in the example tax statements and found anomalies: 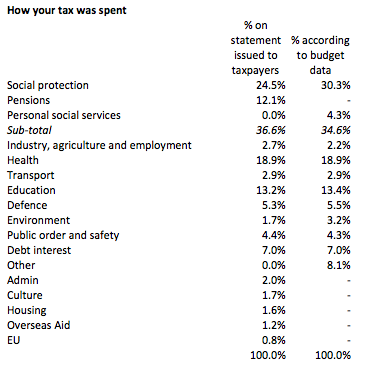 Very oddly, the overall amount spent on 'welfare' has gone up on the personal tax statements and some particularly sensitive items are highlighted, like aid, culture and the EU budget plus admin - whatever that might be. Housing (which apparently includes street lighting - although why this is highlighted is not clear) has been split from the environment, which does show how little is spent on either, I suppose, whilst in some other areas cost reallocations make for odd results. Why this was necessary is hard to explain.

Unless, of course, this whole exercise is seen for exactly what it is - which is  an incredibly expensive pre-election propaganda exercise on the part of the government. When we had David Cameron saying last week that cutting tax was a moral imperative, and we now see the government spending  money to write to 24 million taxpayers (when there are 31 million taxpayers in all, meaning a selective sample has been taken) whilst ignoring those who do not pay tax - presumably because they do not count - it is very obvious that the purpose of this exercise is to communicate a message not on how much tax a person pays but on how much tax they pay for the benefit of others. This is about promoting pettiness, jealousy and resentment.

I can say that with some certainty. First the statement ignores the fact that over half the  people who will receive this letter will get back more in benefits or state services than they actually pay for. This is a fact that the tax statement completely ignores, when it could so easily say that most people earning less than about £30,000 a year in the UK to actually net benefit from the activities of the state.

Let's also ignore the fact that the social protection figure which is highlighted as the first in the government's list of spending does not, despite the impression given, represent payments to the unemployed, but is in fact for the benefit of the sick, children, and vulnerable or is paid in housing benefit, with the majority of recipients being those in work, and let's read this as the government wants, which is that a quarter of government spending goes to those they would describe as ' scroungers'.

The first is resentment of taxation,  despite the fact that, as I note, most people benefit from it. This is an exercise in seeking to undermine the state.

The second is  anger with benefit claimants, even though those people are entitled to the payments that they receive in law, the fraud rate is incredibly low, and the need which is addressed is very real. This is an exercise in scapegoating.

And the third is anger with the EU, I suspect. Why else highlight such a small sum of money? This is an exercise in petty nationalism.

And all this is being done with what this government calls, incorrectly, taxpayer's money at a time when the government is trying to crack down on all disguised election spending through the Lobbying Act and yet itself undertakes this gross act of election propaganda and disguises it as state spending . It is really quite a sickening exercise.