Can we close the tax gap? (Answer: yes, we can)

I was in debate with Heinz Zourek, the Director General of EU taxation yesterday at an event I have already mentioned.

During that debate I was somewhat surprised to hear him say it was not worth investing to close the tax gap, including that in the UK, which the latest EU VAT estimate would suggest to be 10.4% for that tax alone so I took that issue up with him and he made clear that what he meant was it was not worth eliminating the while tax gap because that could never be cost effective, but the UK clearly had a long way to go and could at least halve its tax gap.

I accept that point. There is no way we will ever close the tax gap - but it is vast, and much bigger than HMRC estimate. The question is. Then, how much could be recovered?

Start with this table from the EU, published last week, showing their estimate of EU VAT gaps: 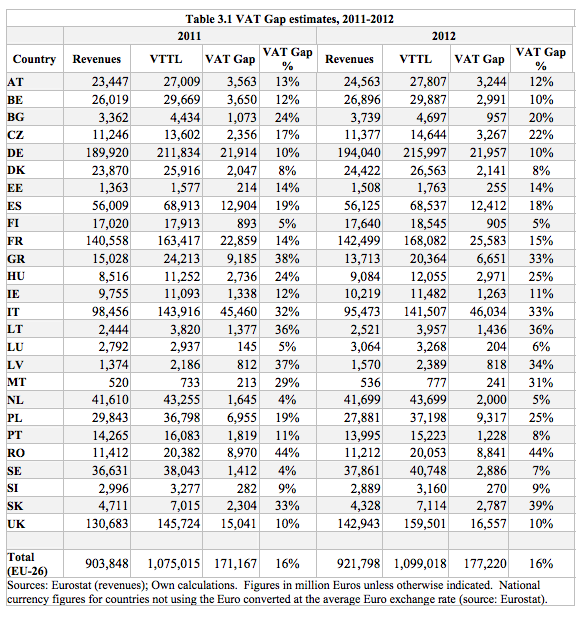 The UK loss is a little over 10%. That in the Netherlands is 5%, as it is in Finland. Slovakia, Slovenia, Denmark, Luxembourg and Portugal (rather surprisingly) apparently also do better than us.

In that case it is very clear that we are a long way from being close to our optimal tax gap rate.

If we closed half the HMRC tax gap we would recover £17 billion. That has to be the minimum targeted objective.

If we closed half my estimate we would get £60 billion, which I accept is as good as it might get.

HMRC based estimates are far too low, however. I think the goal has to be much higher than that because it is impossible to think that tax evasion is as low as HMRC say it is. In that case a realistic goal for now might be less than half way between the mid point of the two - make it £30 billion.

Then we'd really be making a difference. And this is, most definitely, possible. Finland and the Netherlands prove it is.