What SSE have done to get the Fair Tax Mark

I have applauded SSE for getting the Fair Tax Mark today, but I have also seen comment that suggests that SSE have not done much to achieve this award.

This is quite wrong. They have significantly changed their tax reporting. First they have published a new tax policy. 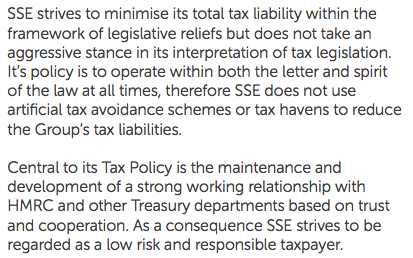 I may not have written it quite like that, but this is SSE's policy, not mine. The Fair Tax Mark looks at the commitments made and this one clearly rejects tax avoidance, and that is what we expect.

Second they have considerably enhanced the tax disclosure previously made in their 2014 accounts. To imply this is the same as any other company is just incorrect. Take, for example, the fact that there is a country-by-country reporting note here. You won't find a note like that in any other FTSE 100 company right now.

To say SSE got this without making a significant change to their reporting is just wrong.