Who paid for the banking crisis? An answer in one graph

I have already referred to the new Office for Budget Responsibility report on the 2008 financial crisis and its aftermath. This table from it is telling: 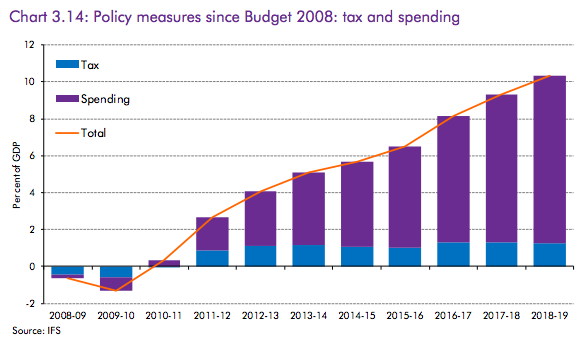 Of the measures taken to achieve "one of the biggest deficit reduction programmes seen in any advanced economy since World War II" (their words, I stress) the vast majority have impacted on government spending, and that will also to be the case over the next four years.

This has, of course, resulted in the loss of hundreds of thousands of jobs, and the skills that went with them as the public sector has been decimated. And increasing tax gap has been on consequence.

And those who have kept their jobs in the public sector have seen their real earnings fall, dramatically.

But most tellingly the impact has been on those who depend on the public sector, and these are of course those who are worse off in society including many who are vulnerable through no fault of their own.

The result is obvious. First we are not all in this together. Those who are not heavily dependent on the state are having a good recession, especially now house prices have increased. Many will hardly realise anything has happened,

Those who have real needs have paid and will pay an enormous price for deficit reduction. In fact, they have paid most of it. The table makes that very, very clear.

And what is really galling is that there is no need for this deficit reduction programme. The world is queueing up to buy UK government debt. It's an asset they want to own, but we're trying to deny them the chance to do so by punishing people in our economy and at the same time seeking to crush GDP growth, which is the inevitable consequence of this policy. A more callously inane economic policy would be hard to imagine.