I have recently written about Jolyon Maugham, a tax barrister who is having a real and positive impact on campaigns against tax avoidance.

I think it's time to draw attention to another tax barrister who is, I think, also going to have a big impact on this issue. He is David Quentin. As he says of himself:

David Quentin is a barrister specialising in UK and international tax law. He has worked at leading UK law firms Allen & Overy LLP and Farrer & Co LLP, and has extensive experience advising on corporate and private client tax risk. He is also a Senior Adviser to the Tax Justice Network.

David is a barrister very firmly in the tax justice camp, and that's important because what he brings to this issue are his distinct skills and analytical ability. These are very firmly revealed in a new paper he has written under the title 'Risk Mining the Public Exchequer'. This is, I think, a very significant contribution to debate on a vital issue, which is just what the difference between tax advice, tax planning, tax avoidance and aggressive tax avoidance is.

I strongly recommend reading the twenty page paper as a whole, but offer one diagram as a taster: 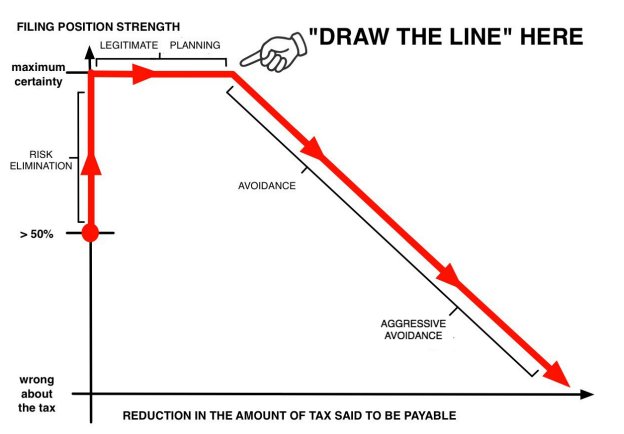 David's argument is that a tax adviser's role can be defined in three ways. The first is to move the tax payer from a position of uncertainty to one that has as much certainty as possible. His example is in clarifying whether a person is self  employed or employed, which requires the adviser to offer  opinion on how a contract can be created which meets the desired intention. An obvious alternative might be in offering advice on the correct VAT status of a transaction. In both cases the intention is not to reduce a tax bill but is, instead, to deliver tax certainty so that the taxpayer knows where they are with regard to the law and then applies it correctly. The taxpayer's position moves up the vertical axis  as a result.  This is, of course, a thoroughly worthwhile activity.

Having achieved that goal the tax adviser can then suggest certain courses of action to the tax payer that have no risk attached to them but which have the ability to reduce their tax bill. This is possible, of course. Contributions to pensions can attract tax relief. Allowances are due for capital expenditure and people need to know that. ISAs are completely consistent with the law. There is absolutely no risk in making use of these options, and many others, available in law. As a result it is possible to give tax advice and reduce a taxpayer's liability and not increase their tax risk. This is represented in David Quentin's diagram by movement to the right along the top horizontal red line.

But then, as David says:

[T]here will come a point when our filing position starts to get weaker again. There are further tax savings to be obtained but they cannot be guaranteed, or at least they cannot be said to be as likely to succeed as the filing position we would have if we did not implement the advice. New tax risk factors are being introduced, and the relative certainty in the modalities of the verbs has reversed. It is now the tax advice which produces an analysis that “might” succeed, whereas if we do not implement the advice the tax “will” be payable.

The concept of the 'filing position' is important here and is not, perhaps, explored by David as much as he might. It has to be remembered that a taxpayer 'self assesses' in the UK. That means that they tell HMRC what they think their tax position is. This is their 'filing position', and they have a choice to make on it. They can opt for certainty, or they can adopt a riskier position where the outcome of their claim is not certain. Once they do that they enter the downward slope towards the right hand side of the diagram. This, David argues, is where tax avoidance begins.

It is adopting this position of risk to potentially reduce a tax bill (it can only ever be 'potentially reduce' precisely because the outcome is uncertain  in these situations, with that uncertainty increasing as one descends the right hand slope) that creates the ethical dilemma in tax avoidance in David's opinion, and I agree with him.

I once ran a firm that sought only to reduce taxpayer risk and offer advice within the top horizontal range of possibilities. It was, and is, my belief that firstly tax risk was not worth taking precisely because there was risk which created uncertainty, and secondly, that there were better things for me and my client to always undertake to improve their net income  then take this risk. In other words, I, and they, were better off increasing their pre-tax income than reducing their tax liability on a reduced sum. This is a factor almost never taken into account in this equation, but which is relevant because time available to take action is always an active constraint in any adviser / client and in any real time business decision taking process.

David does however, quite reasonably, not take that point but does take another, which is that:

Eventually the tax advice will be so aggressive that the chances of success upon tax authority challenge hit the bottom. The anti-avoidance law definitely applies, or the statutory interpretation relied upon cannot possibly be correct, or the commercial reality of the transaction is such that the formal analysis is hopelessly unsustainable, or the factual assertions are never going to withstand forensic scrutiny, or the accounting assumptions are false. Our filing position is, in effect, a lie. And if it is challenged it will fail. We are at the far end of our journey along the tax advice risk curve.

It is at this end of the spectrum that many recent tax schemes have operated, and failed. But before that situation is reached David thinks there is risk, which starts at he point where the downward slope begins and activity moves from legitimate tax planning to the risk assumption inherent in tax avoidance. Of this he says:

Admittedly at first the risk differential is small, but it is appreciable to a professional because pointing out tax risk, or (more accurately) identifying tax risk factors which are introduced by a given structuring option, is a tax adviser’s job. Indeed if a tax adviser fails to identify a tax risk factor which is introduced by a given structuring option and that risk eventuates, the adviser has in principle exposed herself or her firm to an action in professional negligence.

In saying this David confirms something I have always suggested, which is that the competent tax adviser always knows when there is ambiguity in their advice because they have to disclose it to their client. If they do not they are professionally reckless. So, for example, running a trade as a limited company with one dominant client and taking the reward as dividends will always be tax avoidance because there is a risk that IR35 rules might apply. It may be deemed an acceptable risk to the adviser and client but there is a risk nonetheless. That has implication. As David puts it:

There is then, according to David, an answer to the question of whether there is a dividing line between legitimate tax planning and tax avoidance. That is at the point where the line in David's diagram begins to turn downwards and tax risk is assumed. There is also an answer to the question of “what is the ‘right’ amount of tax?” As David puts it:

This then gives rise to the question of what, then, is so wrong with the deliberate creation of tax risk? David answers this question by suggesting that the current view of avoidance is wrong, saying:

Avoidance is usually defined as reducing tax payable by legal means, but in fact the opportunity that is increased as you head down the avoidance section of the tax advice risk curve is the opportunity to not pay tax which is legally payable. This is because wherever there is tax risk there is a chance that (a) the filing position is wrong and that extra tax is payable, and there is also a chance that (b) the filing position is not going to get challenged (or that the challenge fails for want of evidence, or fails for technical or procedural reasons).

This is a very different view of tax  and avoidance.  Tautologically David's first observation has to be correct:  if there is tax risk in the taxpayers position it must follow that there is extra tax payable.  At least as interesting, therefore, is the second  idea,  which is the risk factor of being ' found out'. David  explains this in a flowchart that looks like this: 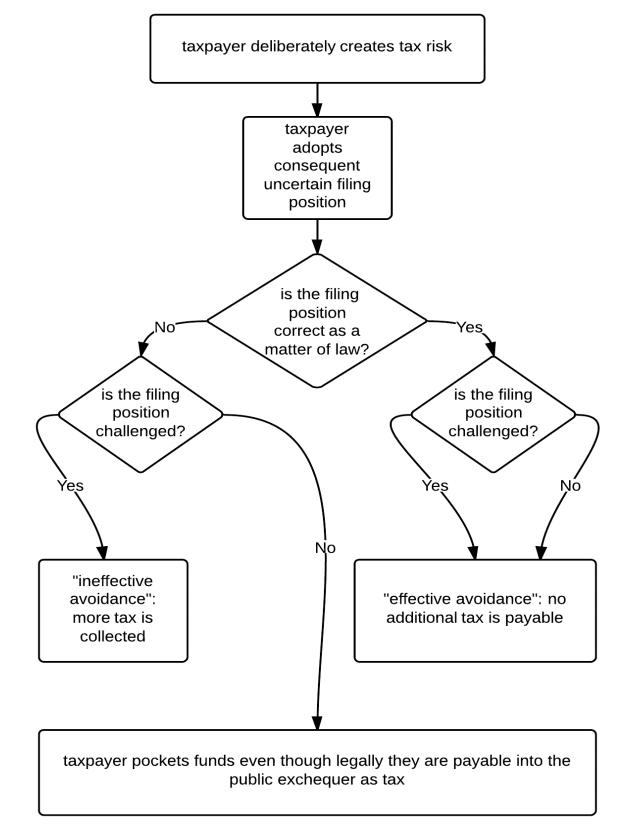 The importance of this flowchart is best expressed by David, who says:

The innovative feature of this apparently simple flow-chart is that I put the questions in the correct order. The mistake invariably made in this context is to treat the process of tax authority challenge as itself determinative of whether or not a liability to pay additional tax arises. This treatment reflects a fundamental error of analysis. Except in the very rare case of retrospective anti-avoidance legislation, the liability is anterior to the processes of enforcement.

in fact any deliberate creation of tax risk, however small its shortfall as compared with maximum filing position certainty, is a deliberately-created opportunity to not pay tax which is legally payable. That opportunity is created at the expense of taxpayers generally, and is therefore anti-social conduct deserving of the opprobrium attaching to the phrase “tax avoidance”.

I think this is absolutely right.

There is, of course, more to David's argument than I have noted here, but I think its significance is that it answers some questions in a deeply logical way that will be hard for many to refute, and it explains why tax avoidance, which is so often claimed to be legal, does in fact create risk that many people find offensive. In achieving those aims this is a major contribution to the debate on tax avoidance, the ways we should think about it, and most importantly, what we should do about it.