The Telegraph published this infographic a few days ago. I'll take the risk of sharing it. The data was produced by Smith & Williamson, a firm of accountants and wealth managers based on ONS and HMRC data (click on the graphic for a bigger image): 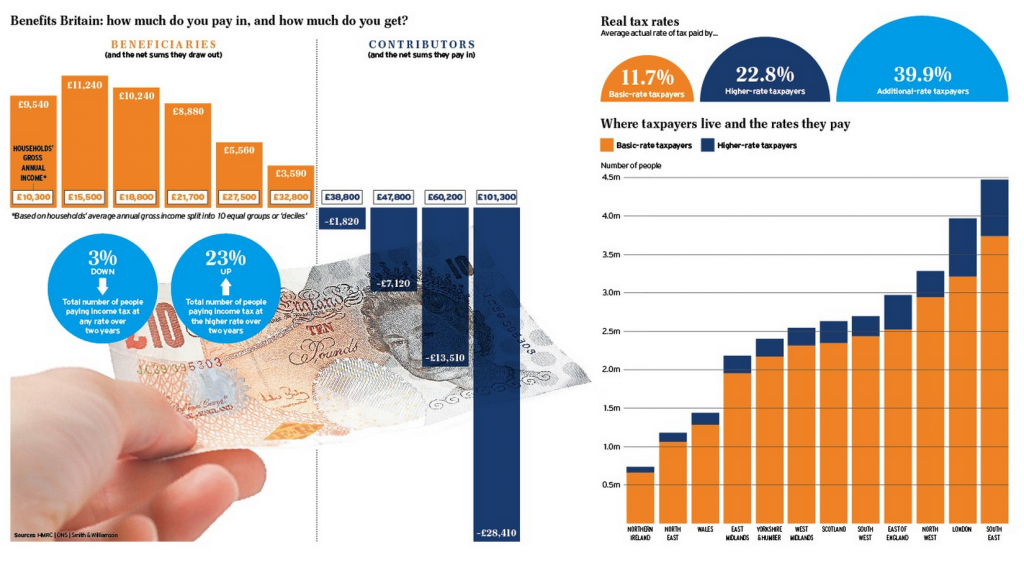 What's the point of reproducing it? Firstly, it's look at those effective tax rates. 11.7% for basic rate taxpayers and 22.8% for higher rate taxpayers. Shall we stop the myth of overtaxing?

Second, the effective tax rate of additional rate payers is highly unlikely to be 39.9%. That's the rate on their income. That ignores the fact that they will shelter income in companies, capital gains, offshore, and so on.

Third the reason why the top earners pay so much is because they can: no one else has the income to do so. That does not mean that the income does not exist. It refers to the way it is distributed. High tax has to compensate for the fact that markets inappropriately over-reward those at the top because they have control of the process of deciding who will be paid best and they decide to pay themselves.

The next result is more than half the UK draws more from the state than it pays. And if that did not happen then there'd be remarkably little wealth and an awful lot of misery left. That's what this infographic says. It doesn't say there is too much tax or how unfair it is that more than half take out more than they contribute (when you'd expect that to be half anyway). The real message is just how unequal society is that some can pay so much and how much more needs to be done to improve equality.