Almost 60% of large company CEOs want country-by-country reporting. So why can’t we have it, now?

As Christian Aid has noted today:

The UK government is lagging behind business leaders in its support for corporate transparency, a new survey suggests. The survey, by PricewaterhouseCoopers, found evidence that most chief executives support reforms which would make it harder for multinationals to dodge tax in the UK and abroad - reforms which the UK government has consistently rejected.

Two-thirds (66 per cent) of the CEOs of large UK firms surveyed agreed that ‘multinationals should be required to publish the revenues, profits and taxes paid for each territory where they operate’.

PwC’s research, which involved 1,344 interviews with CEOs in 68 countries, also found that across all the CEOs surveyed, 59 per cent supported the requirement.

That's an amazing claim, so I went to look at the data that PWC has published. It looks like this: 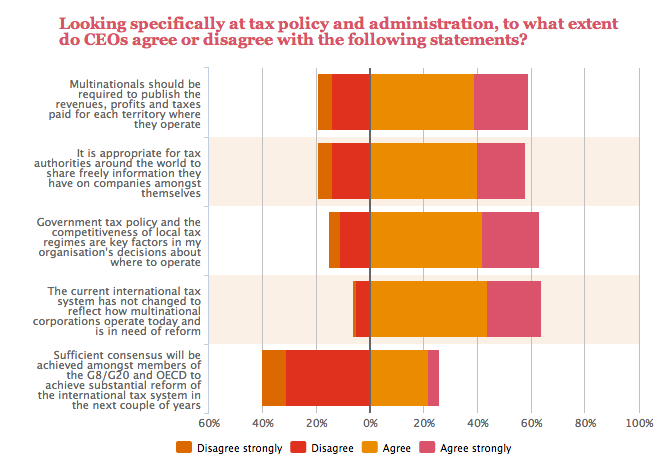 What really struck me with regard to country-by-country reporting - to which the first question relates and about which I should declare my personal interest as its creator - is not just that almost 60% agree that it should happen, but that the strong disagreement is so small. That is very powerful indeed.

As worryingly, it is the OECD that has been tasked with delivery of country-by-country reporting at present, and it seems that most of the business community share my doubts about its ability to deliver anything very meaningful on tax reform. That's troubling.

But for now I'll welcome the warmest endorsement yet for country-by-country reporting as a very firm step in the right direction.