The Tax Justice Network's 2013 Financial Secrecy Index exposes yawning gap between G20 rhetoric and reality. Issued today, this is their press release on the new FSI (this blog can also be viewed here):

Today the Tax Justice Network launches its 2013 Financial Secrecy Index, the biggest ever survey of global financial secrecy. This unique index combines a secrecy score with a weighting to create a ranking of the countries that most actively and aggressively promote secrecy in global finance.
Click here: Financial Secrecy Index.
This new edition of the Financial Secrecy Index shows that the United Kingdom is the most important global player in the financial secrecy world. While the UK itself ranks only in 21st place, it supports and partly controls a web of secrecy jurisdictions around the world, from Cayman and Bermuda to Jersey and Gibraltar. Had we aggregated the entire British network it would easily top the index, far above Switzerland. (Explore the British Connection here.)
Claims in September by British Prime Minister David Cameron that the UK havens are no longer a concern are baseless: our research demonstrates that while the British Virgin Islands, Cayman Islands and some other British jurisdictions have recently curbed some secrecy offerings, others have expanded theirs.[i] (See also our full narrative reports on the Cayman Islands, on Jersey and on theBritish Virgin Islands.) The table below shows the extent of the gap between the political rhetoric and the on-the-ground reality of British tax havens (click on the table and accompanying key to enlarge). 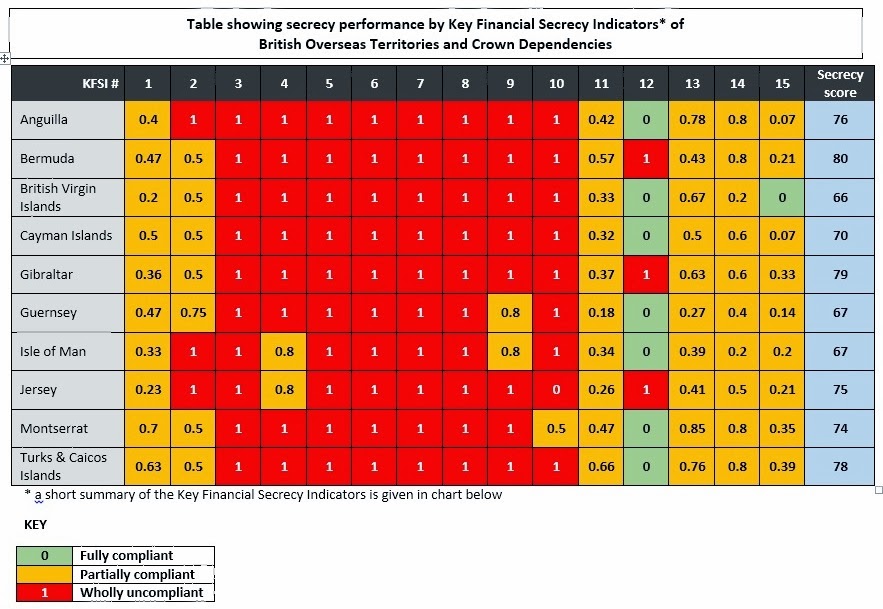 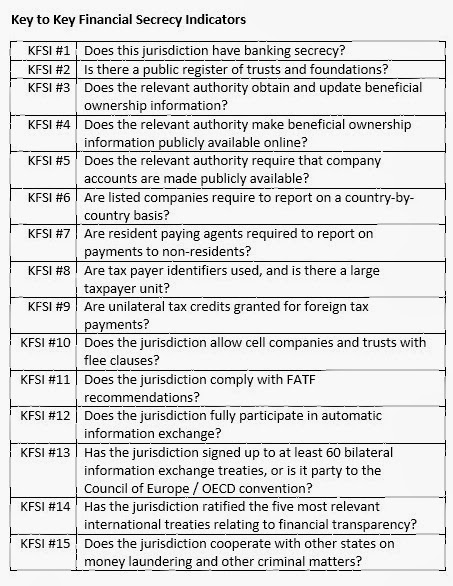 Our index, now expanded to cover 82 jurisdictions, also reveals how broader claims by the G20 and leading powers to have cracked down effectively on tax havens are bogus.
While some welcome promises have been made and modest improvements seen, we remain light years away from seeing the transformative changes the world so urgently needs.
Some positive trends are evident. With public tolerance for offshore financial secrecy having fallen sharply in many countries since our last index in 2011, we see potential for real political change: for example, citizens are demanding full disclosure in public registries of the beneficial owners that lie behind offshore shell companies, trusts, anstalts, foundations and so on.
Secrecy comes in many flavours, and we have seen progress in some areas. Crucially, automatic information exchange is now recognised as the effective global standard for tackling tax evasion, which was not the case when we published our last index in 2011. More countries are joining the OECD/Council of Europe Multilateral Tax Convention which, while flawed, is the first that could in principle benefit developing countries with automatic information exchange. Two useful multinational initiatives — notably the European Union’s  Savings Tax Directive and the U.S.’ Foreign Account Tax Compliance Act (FATCA),both involving automatic information exchange - are making headway. Country by country reporting is gaining traction, particularly in Europe.
But the index reveals that overall, financial secrecy remains alive and well.
Donate
13