The EU issued a summary of a new report today on the EU wide VAT gap that says: 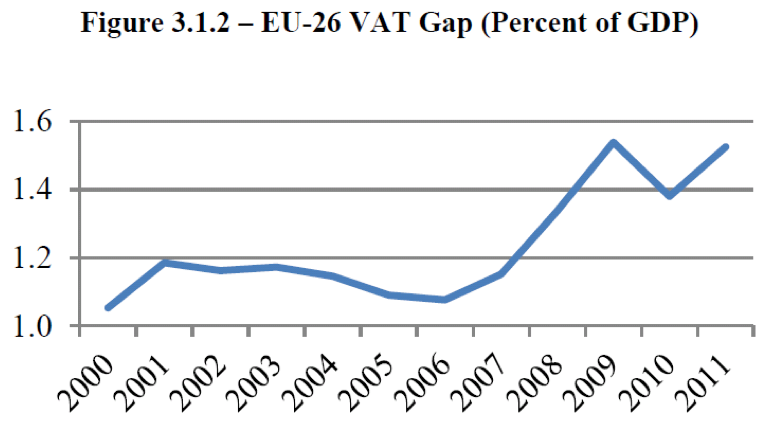 What has been the effect of the economic crisis on the VAT Gap?

The data show that up to 2008, there had been a moderate declining trend in the level of the VAT Gap, particularly in a number of post-accession countries.

However, from 2008, the VAT Gap in many (but not all) countries increased with recession and the financial crisis from 2008. Spain, Greece, Latvia, Ireland, Portugal and Slovakia saw the highest increases in their gaps.

On the other hand, Sweden, Poland, Malta, Bulgaria and the Czech Republic were able to improve VAT collection levels during this period, and reduce their VAT Gap.

Taking into account the various components of the VAT Gap, there are several factors which can explain the increase in VAT GAP in times of crisis. On the one hand, sharp increases in VAT rates to redress public finances, particularly when coupled with poor enforcement, may have deterred compliance to some extent. On the other hand, the increase in insolvencies and bankruptcies, and a drop in imports (which often represent the easiest VAT collection to enforce) would also have contributed to the increase in the VAT Gap.

I am not surprised by the overall estimate: it is just a little less than my estimate of the overall proportion of tax lost to evasion in the EU economy.

But I know who I am inclined to believe on this issue, and it's not HMRC, whose latest VAT gap data has looked decidedly strange and seriously understated.

I feel my work is vindicated, yet again.

NB Added 20.9.13: It has been suggested it is inappropriate to extrapolate 18% of lost theoretical VAT to GDP. I disagree. VAT is charged on sales. The loss is motivated by a desire to avoid tax and regulation. There is not reason to think that the loss is any less on exempt or zero rated sales whilst the losses in other elements of GDP e.g. profits, are all too well recorded to think they will be proportionately less