HMRC has said for the last few years that closing the tax gap is its number one objective. I think that appropriate.

The tax gap is made up of tax paid late, tax evaded and tax avoided.

One significant part of tax avoided is that lost to marketed tax schemes. These have had to be disclosed since 2004. If HMRC was winning you would expect the number of such schemes to be going down. As the latest NAO report on this issue shows, they aren't. The number in use is going up: 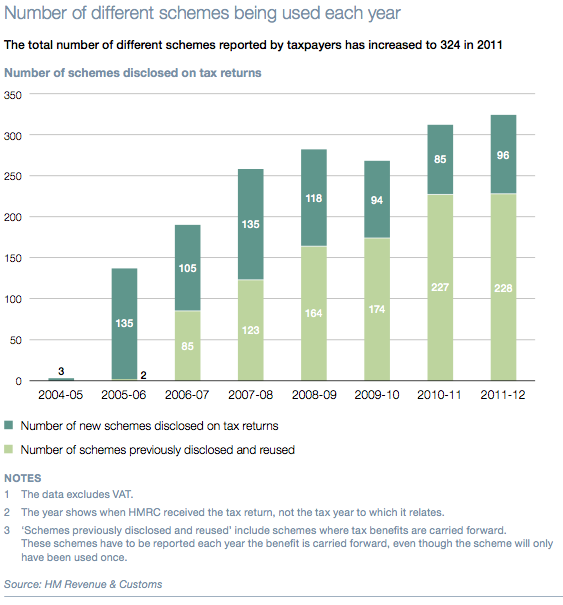 I think that's one of the clearest indicators yet of HMRC's failure to come to terms with tax avoidance.

It's also notable that numbers have increased significantly under the current government; I suspect people no longer think there is the willingness to tackle this issue. They also know that so many staff are being sacked at HMRC the chances of losing from using such schemes are low. And when there are 41,000 cases outstanding, they're almost certainly right to think so.

When we have a government that is not able or (more importantly) willing to collect tax but is willing to cut services, benefits, education, healthcare, pensions and investment the country needs to worry.

Now, then, is that time to worry because there are only two ways to explain this phenomena and its recent increase. One is incompetence. The other is a willingness to turn a blind eye to it.