This is another graph based on budget data from a period of more than a decade, all sourced from HM Treasury. It shows current government income compared to current government spending from 1997 to 2016 (the last being forecast data, of course). Current spending excludes investment spending but that then leaves this looking akin to a more commonly understood commercial sector view of 'breaking even': 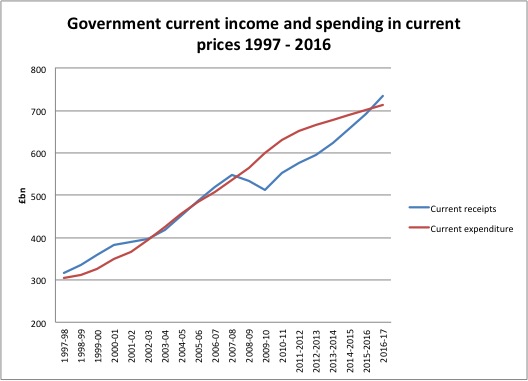 Despite all the spin against them, Labour had spending well under control throughout this period. It managed its budgets.

Then the bankers trashed the economy. The impact is very obvious.

Now the Tories say they'll rebalance the books, except as I've shown, there is no chance that they will do that.

In that case we still face the certainty of deficits for time to come. Ed Balls has realised that.

What he and we now need to say is what we do about that when it is very obvious that the private sector cannot ever get us out of this mess. I suggest starting from here, and here and, of course, The Courageous State.