Flat taxes are just an excuse to make the rich richer

The Tax Justice Network blog has an entry on an old b?™te noire of mine, flat taxes. As they note:

Citizens for Tax Justice in Washington has another excellent short paper, this time about the flat tax. It begins:

Since 1995, Senator Arlen Specter of Pennsylvania has introduced legislation to create a federal “flat tax” in every session of Congress, including this session. This single-rate tax would replace the existing progressive personal income tax, as well as the corporate income tax and estate tax.

Well, for starters, there is the fact that the people who dreamed up this gimmick in 1983 admitted that a flat tax "will be a tremendous boon to the economic elite” and that “it is an obvious mathematical law that lower taxes on the successful will have to be made up by higher taxes on average people.” This table provides the evidence: 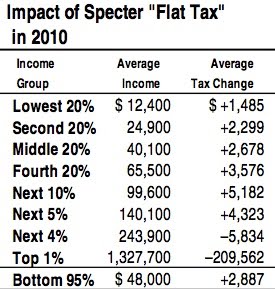 And CTJ's time tested number crunching has analysed the proposal, and worked out that it would involve:

What actually makes the tax system complicated are the various loopholes and special breaks that mostly benefit businesses and higher-income individuals. Capital gains income (which wealthy investors tend to have) is currently taxed at a lower rate than the wage and salary income that constitutes almost all income for most Americans.

Many wealthy people therefore have an incentive to use various schemes to disguise what is really compensation for work as capital gains income. But instead of addressing this by taxing all income the same way, the Specter flat tax makes capital gains income entirely tax-free!

To which I would add just one thing: remember it was not long ago George Osborne was flirting with this idea. Why was that, I wonder?