The government does not spend taxpayers’ money: that clears the government’s debt to the Bank of England

A reader of this blog, who I do not think I have met, secured the following Freedom of Information answer from HM Revenue this week: 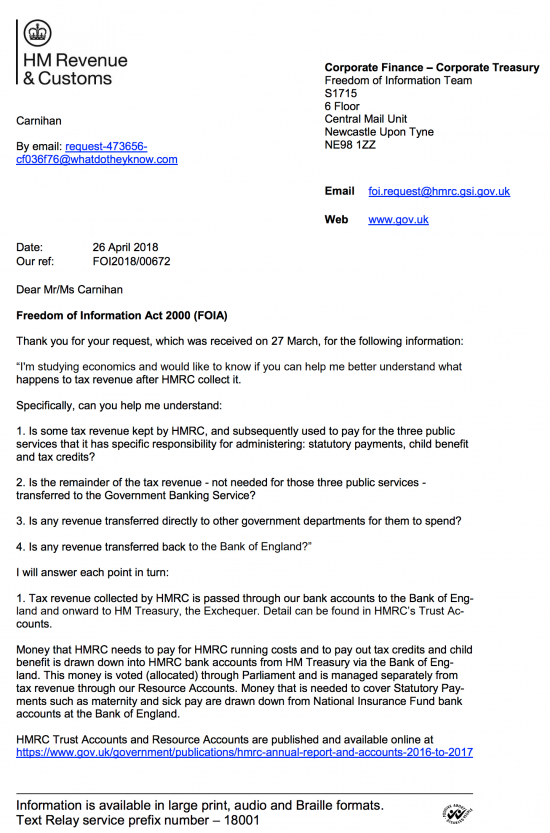 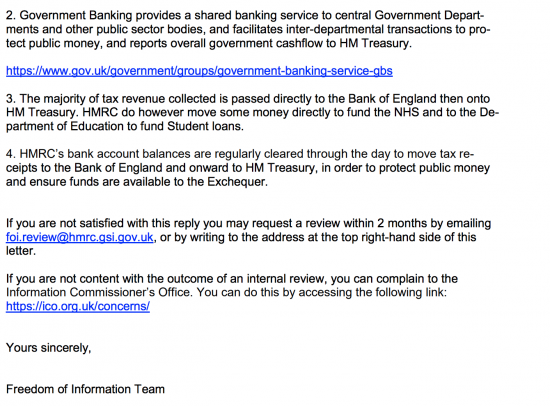 It would, of course, be possible to say ‘So what?’ and leave it at that. HMRC raises money and pays it to the Bank of England.

In other words (for my second lesson in national income accounting this morning) the relationship can be formally summarised as:

M = Government created money (and so âˆ†M is the change in that sum during a period).

There is then no direct relationship at all between government spending and tax, which is exactly what HMRC have now confirmed. All they do is help clear the Treasury loan account at the Bank of England, just as government borrowing and quantitative easing funding do as well.

But what that means is that the next time the government say they are spending taxpayers' money you know that's not true because there is, quite literally, no way they can say that given the economic reality of what is going on. They're always spending the Bank of England's money, which is then cleared by taxes, borrowing or QE (which is, in effect, an alternative form of Bank of England created money).

That's not to deny that taxpayers fit into the equation: they do, but not in the way the government says. They fit in in the way the modern monetary theory and I say. That's because what tax actually does is clear the government's debt at the Bank of England, as HMRC says. This is done to limit the amount of new money government spending creates. The aim is to control inflation. But that's a very different purpose to taxes funding government spending, which as HMRC has confirmed, is not what they do.

So thanks to Lee Carnihan for a well placed FoI request. The answer was, maybe, more telling than HMRC realise.