I noted yesterday that the suggestion that Google, Facebook and other tech companies should pay tax on their turnovers would give rise to all sorts of problems, almost certainly be regressive, and be a move in the wrong direction on corporation tax reform. I suggested an Alternative Minimum Corporation Tax as an alternative where, in effect, tax be charged at a reduced rate on the global weighted profits that would appear to arise in a country if the local tax paid appeared to be inappropriately small, probably because of the use of tax avoidance activities. Some people asked me for a worked example, so I have done one.

I have taken KPMG corporation tax rate data for 170 countries. I have added population data from the IMF. The IMF did not have population data for some tax havens. I allocated them 100,000 each. I found population data for Syria and The West Bank from the CIA Fact Book (a reliable source) as the IMF did not have it. The result was population data for 96.7% of the world. Notable countries omitted from the sample were Iran, Haiti, Cuba, Puerto Rico, Kosovo, Laos, North Korea, Lesotho, Mali and Nepal. I checked GDP for the sample using IMF data and the states surveyed cover at least 98.5% of world GDP. I think we can call it comprehensive. I then weighted the tax rates for each jurisdiction by the proportion of world population that lived in the place to calculate a weighted average tax rate. The result is here: world CT rates.

The average corporation tax rate on that basis is 28.247%. I suggested a country use 80% of that for its AMCT but that would clearly be inappropriate in the case of the UK: you cannot have an anti-avoidance measure charged at more than you headline rate. So I suggest instead that 80% of that average rate or the headline rate be used. In the UK that would mean an AMCT rate of 15.2%.

Now let's look at Google, or rather, it's parent company Alphabet. The Alphabet income statement looks like this: 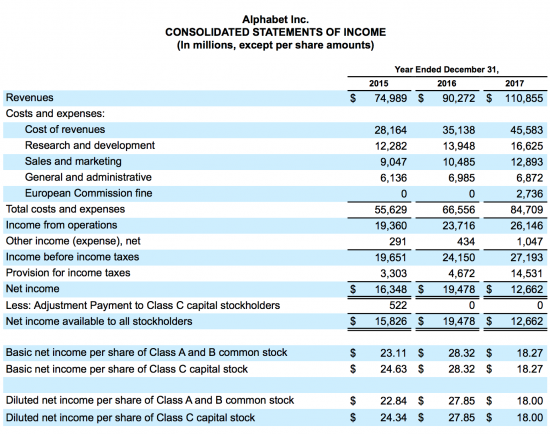 The last data we have on geographic split of revenues comes from 2016 and was as follows:

In other words, in that year 8.64% of revenue was in the UK. I am assuming that remained true in 2017 when no data is available.

Now let's look at Google UK (it only has one such company, which does make life easier. The last accounts are to June 2016, which is inconvenient as they are out of date and for non-matching periods. We will have to assume they cover 2016. Its income statement is like this: 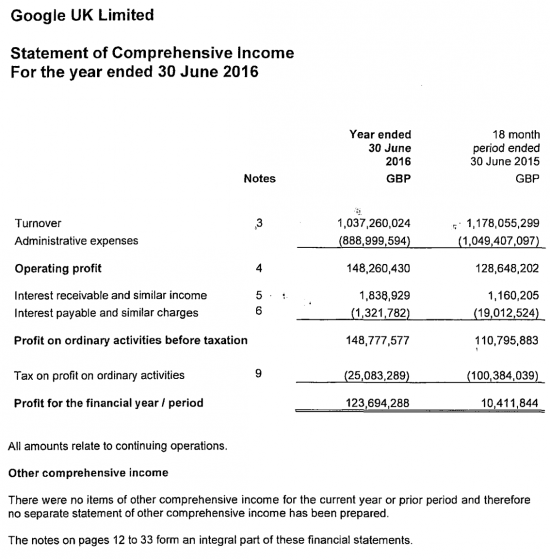 It's declared profit was £149 million. It's tax charge was explained like this:

I will use the current tax figure of £37.7 million.

At a rate of 15.2% on likely UK attributable profits of £1,116 million (which are low, because I have included a labour as well as turnover factor in the calculation) the expected tax would have been £169.6 million on this basis.

That sum less the £37.7 million paid, or a net figure of £131.9 million, would, I suggest, have been its Alternative Minimum Corporation Tax charge.

The calculation is rational, clear, on profits, wholly based on data, and is clearly intended to ensure that tax avoidance is defeated: avoidance that meant that declared UK turnover was some £4.6 billion less than expected.

I suggest that this is the right direction of travel for dealing with this issue.