Will the fact that tax is so obviously a good thing be discussed during this election?

A number of recent discussions, including the comments made by Alex Cobham to the Scottish parliament on the psychology of tax payment and discussion of potential tax increases after the election, made me think of something I wrote in chapter 2 of The Joy of Tax:

The following graph shows the relationship between nominal GDP per head of population in 175 countries according to the CIA Factbook (a reliable source) and aggregate taxation as a proportion of that GDP (source, The Heritage Foundation, which seems reliable on this occasion). I added the linear trend line. 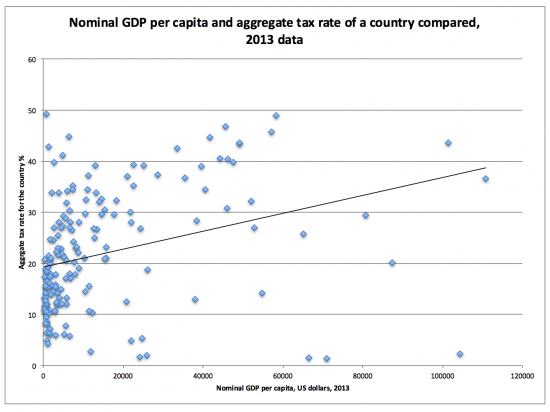 As GDP per capita rises so does the aggregate tax rate. Or vice versa, of course. The relationship holds if average incomes below $5,000 a year, $10,000 and $20,000 a year are excluded, although the trend line begins to flatten a little as the rate of exclusion increases, perhaps unsurprisingly.

Now that does not of itself prove anything: correlation is not proof of causation, but it does seem to suggest that higher taxed states are better off and it’s my suspicion that most people know this. They realise that there is in fact a relationship between tax and well-being and that it is strongly positive for a country and so, in turn, for them. And that is why, as HM Revenue & Customs have put it, the vast majority of tax is paid without them having to do (almost) anything.

I now think that the graph is even more telling than I did in 2015 when I wrote that book. The reality is that higher tax payment does simply reflect greater government spending. To some degree, both in my theory of modern taxation and as observed in practice, this has to be the case. But that also means that higher government spending is reflected in higher GDP, which is hardly surprising when GDP is defined as the aggregate of spending on consumption, investment, exports less imports and that by the government. And when, as Keynes noted, markets are rarely good at establishing equilibria for the economy as a whole meaning that unemployment is normal without government intervention then increased government spending results in increased well being without any risk that it might prevent any activity that markets might have thought desirable; indeed the opposite is probable and markets are highly likely to do more because of that government spending because of what are called multiplier effects.

To put it another way, countries are well off because their tax to GDP ratios are high because those in turn reflect high government spending and high government spending is the surest indicator that there is that a country is using its resources to best effect, including the capacity of all in its population to earn to the best of their ability as a result of education, training and investment in productivity (which, of course, includes health services). And I think, as Alex Cobham suggested people know that, and if they believe that the outcome is just they willingly pay tax as a result.

The whole rhetoric of tax burdens, austerity, and so much more has been designed to undermine this understanding.  But the only proven way to destroy the dominant belief that what government does is by and large good for us (and I say that because of course there will always be exceptions) has been found to be the delivery of dire government services so that we do not think that the outcome of paying tax is just. So, education, healthcare, benefits, social care and so much more is being undermined by the government precisely so that we think it cannot deliver so that it can persuade a majority to deliver big tax cuts for a minority.

That policy of destruction is working to a degree. And it needs to be countered. That counter-narrative is what I am looking for from the combined opposition parties in this election.