QE does cancel government debt – its own accounts prove the point

I have, for a very long time, argued that quantitative easing - of all forms - cancels government debt. My argument is simple: it is that if the government owns its own debt then it cannot owe it to someone else and so the debt is, effectively, cancelled. Despite my persistence in arguing this the point has rarely been acknowledged, but is key to People's Quantitative Easing, so I have done a little rummaging in the Whole of Government Accounts for 2013-14 at the suggestion of Neil Wilson. Those accounts show in Note 23 the government's liabilities at 31 March 2014, as follows: 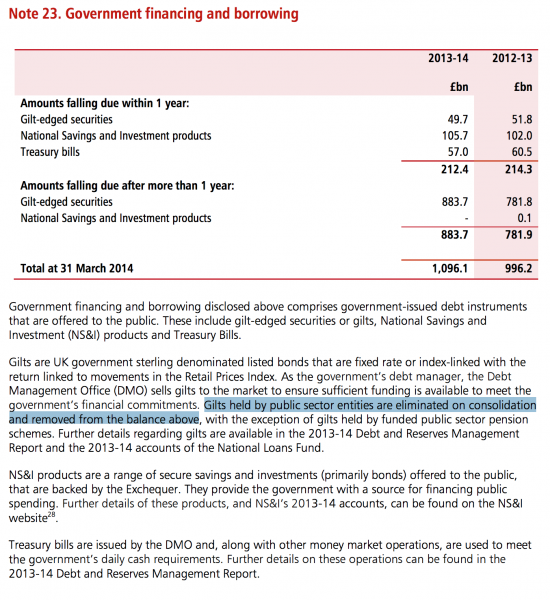 So, excluding National Savings and Investments that is true borrowing of £990 billion.

This I have then compared with the figure for government borrowing in the OBR forecasts for the same date in the budget forecasts from March this year: 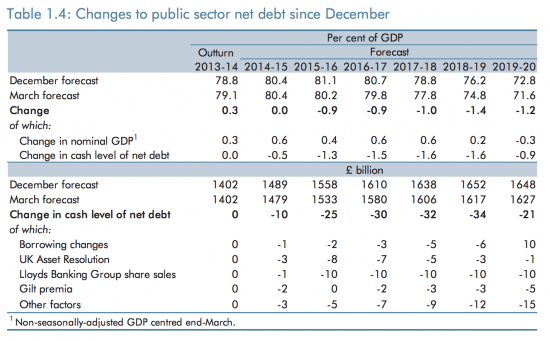 So which figure is right? Go back to note 23 in the accounts and the bit I have highlighted in blue. It says:

If you want to know what that really means go to page 23 in the accounts:

What that says is that the primary difference between these two figures is the offset of £375 billion in QE which is cancelled in the government's own accounts, as I have always argued. I admit the rest of the difference I cannot explain: maybe the government should.

So I have always been right.

And what this also says is that all the claims made for the level of government debt in this country are also deliberately and persistently and knowingly mis-stated to feed the austerity narrative.  It's about time that was said, loud and clear.