The untold truth about quantitative easing is it simply cancels debt – and that means national debt is now just 45.1% of GDP

Simon Jenkins says in the Guardian this morning:

It must be the biggest confidence trick of all time. It is a cheat, a scam, a fiddle, a bankers' ramp, a revenge of big money against an ungrateful world. It is called quantitative easing, and nobody has a clue what it means. According to the Bank of England, the past four years have seen £325bn pumped into the British economy to kickstart growth, with another £50bn now on the way. This enormous sum does not exist and never has. It is not "printed" money or funny money. It is no money. The one silver bullet on which the coalition relies to pull Britain out of recession is a fiction.

His argument is that no one knows what the £375 billion in question has done, so let me tell you. My data sources for what follows are the Bank of England and HM Treasury. I've prepared the following table from their data: 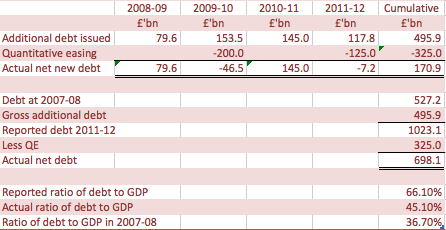 The first line is new debt issued in the year. For this purpose I exclude debt in privatised banks.

The second line shows quantitative easing issued. Remember what QE is: the Bank of England says:

Between March and November 2009, the MPC authorised the purchase of £200 billion worth of assets, mostly UK Government debt or “gilts”.

"Mostly" is a loose term hee: more than £199 billion was gilts. It has been in the subsequent purchases.

Now what that means is that the Bank of England, which is owned by the government, has paid HM Treasury, which is part of the machinery of government, £325 billion to buy debt issued by the government. I agree that it is true that the nominal value of the debt purchased may not have been the same as sum paid for it: I have not got a statistic on that. But although that point is important it does not change the substance of the matter. The reality is, as I have explained before, this means that in any proper accounting system that produced a single set of accounts for the government that debt that was repurchased would have been considered to be cancelled. That's because you can't meaningfully owe yourself money, and yet that is precisely what is happening here. The Treasury owes the Bank of England money but as it in effect owns the Bank of England it therefore owes itself the money and as such the debt has simply been cancelled.

Now there are some who might say that this is the language of the Mad Hatter's Tea Party - that I am talking in riddles to go round in circles. But that's not what I am doing. I am saying that the arrangements used in QE hide this economic reality and that is all the mumbo jumbo is cleared away what is happening in QE is that money is being printed to clear the government's deficit and that debt is not really being issued at all. Precisely because we are in a slump - not just a recession - that money can be printed without major fear of inflation, and indeed without inflation risk at all if the banks could be kept out of the loop.

But that also means that, as a I show in the table above, we haven't giot national debt of just over a trillion now, it's just under £700 billion. Now that's a lot, but it's only 45% of GDP and that was so commonplace during, for example, the Thatcher years that no one noticed it.

That though has ramifications. First, it means the whole debt paranoia is wrong. Debt is not rising at the level claimed by the government. Secondly,  the focus can then move onto paying for services. That kicks in the tax gap debate. Third, it means Labour can honestly say it is not constrained by having to repay debt to future generations - because well over half of all debt issued since 2008 has already been repaid.

That doesn't mean we're not still in crisis. All this can happen simply because we're in a slump. But what it does mean is that the slump and not the debt should be the focus for debate precisely because it is the real issue.

So can we do that now, please?