The personal tax statement announced by the government yesterday continued to bug me last night, so I did some more analysis.

First I used data on the break down of benefits payments tweeted by Jonathan Portes and apparently from this web site - although I admit I can't see it there. It looks reliable, although I had to allow for rounding (which is fair).

Then I assumed a number of quite reasonable things, all based on the fact that although there were explicit spends in 2013/14 of £726 billion there are additionally what are called tax spends, which are money not collected as a result of reliefs and allowances within the tax system, and there are also some implicit subsidies the government supplies not even included within those totals.

Of the latter I included just one, which was the mid point of the annual cost of implicit subsidies supplied by the government to the banking sector which the IMF estimates as being in a range from $20bn to $110bn a year and which I took to be $65bn or £41bn.

Then I used HMRC data on the costs of allowances and reliefs excluding pensions, which I took from the HMRC estimate here. I included a range of these allowances and reliefs. So, personal allowances for income tax and NI are in the list as they are provided as of right to anyone who qualifies, just as benefits should be, and so are completely analogous with them.

Then  I looked at all tax reliefs for savings and investments of various sorts from ISAs, to capital gains tax allowances through to enterprise incentive schemes. These are all reliefs for those with investment income. This is an explicit subsidy to some people that seemed directly comparable with many benefits payments in that sense (alone, I stress), so they were included to.

After that I also looked at VAT exemptions on spending that is largely by those well off, which was that relating to private education and health. I could have included UK domestic transport too as much of this is a subsidy to commuters but decided not to: these things are, eventually subjective.

I also included capital gains tax relief on housing as a specific category since this is as much a subsidy for housing as is housing benefit.

The overall workings are here: I won't reproduce them in this blog as they clutter things.

Then I reduced the data by categorising it to ease presentation, which included grouping all non-unemployment related benefits, all savings reliefs, tax and NIC allowances and VAT exemptions as the results would have been unreadable and not useful otherwise.

And then I turned it all into this pie chart (click on it for a bigger version): 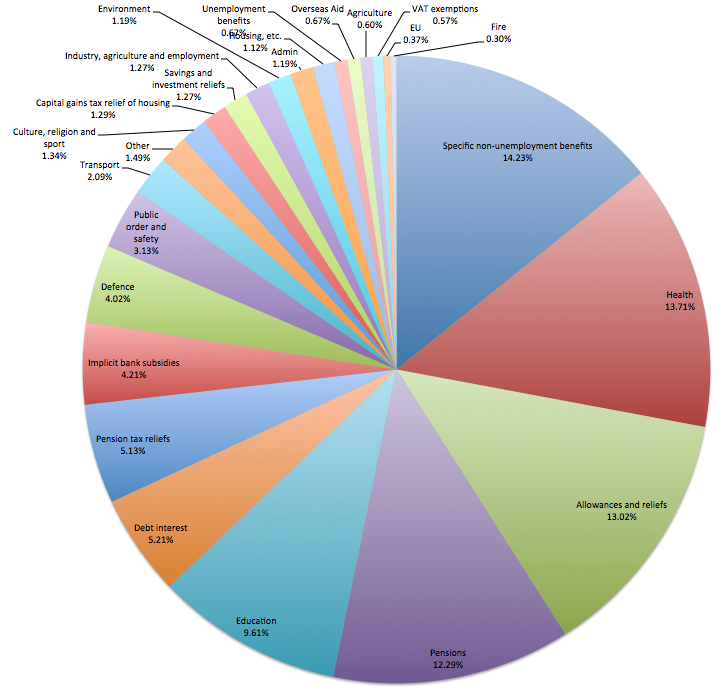 This looks very different from the impression George Osborne wants to give. The third largest category of spending is now allowances and reliefs from which everyone benefits (even the highest paid via national insurance) whilst the seventh largest category of UK spending is pension tax relief and the eighth is implicit subsidies to banks. The data is here.

There are other absurdities that also become apparent. For example, unemployment benefits cost only half the amount used to subsidies personal savings and investments.

It's also no wonder house prices are so distorted when the implicit tax subsidy for home ownership is £12.6 billion a year.

This is the statement George Osborne would not want you to see because it makes clear that subsidies, allowances and reliefs extend right across the UK economy. And they do not, by any means, appear to go to those who necessarily need them most. The view he has presented on this issue has been partial, to say the least, and frankly deeply misleading at best.

I do not mind having a debate about tax. I relish such things. But it has to reflect facts. This data much better reflects those facts. And I did not even include tax lost in this data. The cost of cheating makes things look even stranger still: 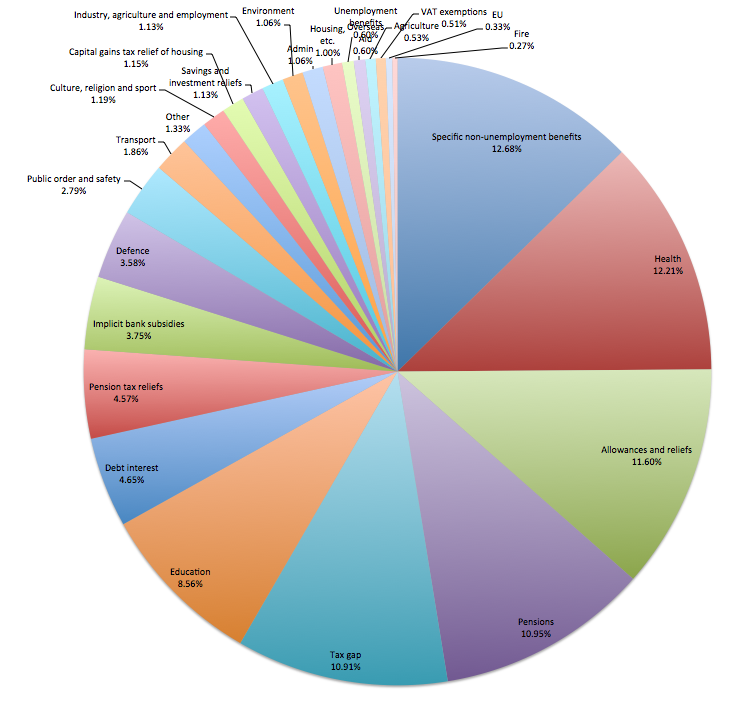 The tax gap of £119.4 billion comes in at a cost almost identical to pensions, to put it in perspective.

I leave you to decide which one to choose, but whatever it is, George Osborne's version is wrong.