It’s austerity that has resulted in prolonged recession: an explanation in one graph

The Office for National Statistics has revised its view of the current recession and GDP movements during this period. It's allowed to do that, for better or worse, but as economist Geoff Tily, formerly of the Treasury and now at the TUC has noted the revision tells a very interesting story. This graph provides the data: 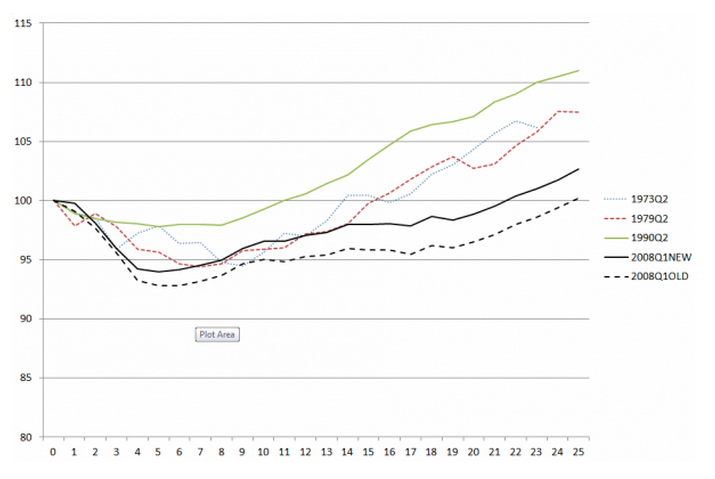 Just click the graph for a bigger version. The X axis is quarters since the recession began and the Y axis percentage change in GDP.

What is now clear from the new solid black line (which has replaced the old view, which is the dotted black line) is that the 2008 crisis began rapidly with a very heavy initial decline in GDP that caught everyone by surprise in 2008, and which was more severe than other recessions - whose dates are noted. But what's also clear is that before Labour was out of office the recession was tracking towards recovery remarkably like 1973 and 1979.

The change came in early 2011 - when Labour's impact and policy was replaced by the austerity agenda of the Coalition. Suddenly the black line takes a remarkably different trajectory to the blue and red lines representing progress in 1973and 1979 and almost flat lines for a period before slowly creeping upwards.

And this was not because the Eurozone really hit a crisis in 2011. As Geoff shows, the ONS data does not support that view. Instead it is because of a massive shortage of investment levels  precisely because of the austerity agenda in government and the rhetoric that discouraged business from investing.

The evidence is clear: Labour had the recovery under control in 2010. The Coalition delivered austerity and the result has been lower growth, a weak recovery, a loss of investment, a decline in capacity, the creation of low value work and low productivity and a mood of economic despair. And all that was chosen and was not inevitable. That's a massive legacy of poor decision making.