The culture of dependency wasn’t created by Labour: that was Thatcher and Major’s work

I've already noted the Observer's excellent article on the myths surrounding social security. Now let's look at another one, which is that Labour increased benefits (or social security) dependency. It is, of course, untrue as this data shows: 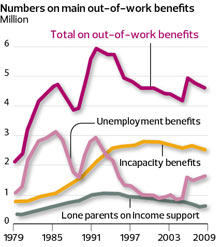 It was the Tories who took dependency to its peak of near enough 6 million and Labour who reduced it to just over 4 million before the recession got in the way. But it was also clear Labour was tackling the issue of incapacity benefits that the Tories created and Labour, rightly or wrongly, reduced support to lone parents too whilst taking unemployment down to levels only dreamt of throughout the period of Tory rule until the banking crash intervened.

Labour did not get everything right on social security. But to say it created a culture of dependency is a straightforward lie. That was entirely a Tory creation.