Can charities be used for tax avoidance? It seems so

Last year there was much furore over George Osborne's attempt to cap tax relief on giving to charity. It was claimed that tax relief on charitable giving could not be abused.

I took part in that debate and from last summer onwards have been aware of the case of the Cup Trust, which became public in the Times and Mirror yesterday whilst I was distracted by events in parliament.

The Cup Trust is enormous in charity terms. It was the 14th largest charity by income in 2011, collecting £97 million. And in two years it allocated just £135,000 of that to good causes whilst seeking to reclaim £46 million in gift aid for donors. The vast majority - about 99.98% of its income in 2011- was used to pay for fund raising costs, as the accounts show: 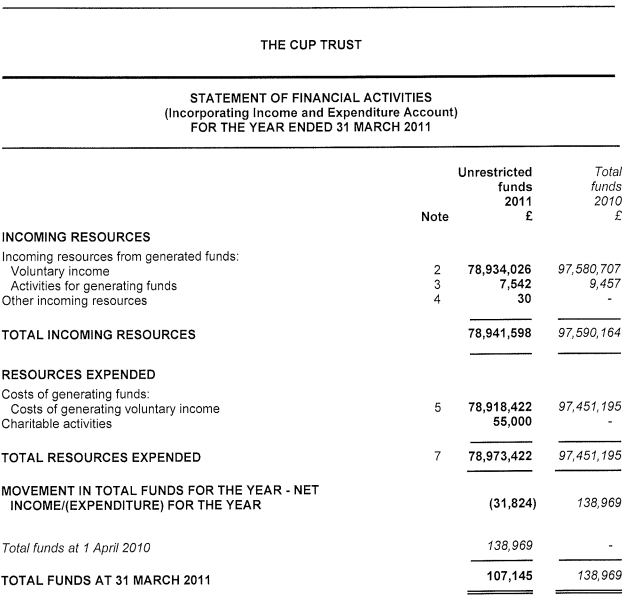 That is an extraordinary set of accounts and certainly unlike any other I have seen.

So too is the fact that the cost of generating the income is explained like this in the accounts:

Gilts are, of course, government bonds. Charities may buy them, of course, but you would expect to see them on the balance sheet if they did, and not as a cost of raising funds. Since gilts don't vary much in value, and certainly don't become worthless, these gilts if they were a fundraising cost must it seems have been given away by the charity as an inducement to raise funding. It's hard to interpret the accounts in any other way that I can see.

Maybe that is why H M Revenue & Customs has refused £46 million of gift aid relief on the claim made by the charity.

And that may also be why the Charity Commission has been investigating it, although without being able to take action, so far.

What seems certain is that this is a giant tax avoidance scheme, and as the Mirror points out:

It is run by advisers Anthony Mehigan and Matthew Jenner, who were behind a tax avoidance scheme used by comedian Jimmy Carr and other wealthy people.

Now that doesn't prove wrongdoing or anything like it: and the Charity Commission I stress have not found the charity doing anything illegal. But it has been denied gift aid relief so far, and until obvious questions about how a charity can spend 99.98% of its income on unusual fund raising methods that seems the right course of action on HMRC's part.

And what this also proves is that there is, unfortunately, a massive market for what looks like a tax scheme involving a charity here in the UK, which more than justified yesterday's PAC hearing.