Companies House: the story of a UK regulatory failure

Companies House is meant to regulate companies incorporated in the UK. It doesn't. It is instead the epitome of a UK regulatory failure. Worse than that, it provides perhaps the best possible evidence of the failure of the 'light touch' UK regulatory regime.

The principle of company regulation is simple. The privilege of limited liability is granted by parliament. In exchange for having it a company has to, supposedly, put on record who owns it, who manages it and what it does in the form of its accounts so that those who engage with it can be assured that they are dealing with identifiable people whose integrity they can assess and whose use of the privilege of limited liability to ensure that they can settle the debts their companies incur can be appraised.  It's a simple, and important logic. Without that form of publicly accessible appraisal then the privilege of limited liability could be abused. And if it was innocent people would lose money, the integrity of markets would suffer, business risk would rise, the cost of business capital would increase, the amount of investment in the economy would fall and the growth in incomes and employment of the UK would be jeopardised. All those things would follow from a failure to regulate such companies like night follows day. So you think we would have an exceptionally well regulated Companies House.

In 2009/10 509,000 companies left the register of UK companies. £325,000 of those were 'struck off' because they had failed to file a form or reply to Companies House correspondence asking for annual returns or accounts.  No one chased them for the missing documents. No one made sure they'd paid the tax they owed. No one even made sure that the companies in question had stopped trading. No, Companies House simply took no action, and deliberately manipulated its statistics by striking the companies off the register so that they would not be registered as regulatory failures on their part.

But they were, just that. we didn't get the accounts and annual returns from those companies that were due. Companies House failed.

Just as Companies House fails to record the proper directors and shareholders of many companies, as the Guardina has been recording this week.

In response to this crisis the government has cut the number of jobs at Companies House by a quarter.

So now they're going to cut the fees companies pay by an average of £1 a time. No doubt they will trumpet this as a cut in the regulatory burden on business. The new fees are here: 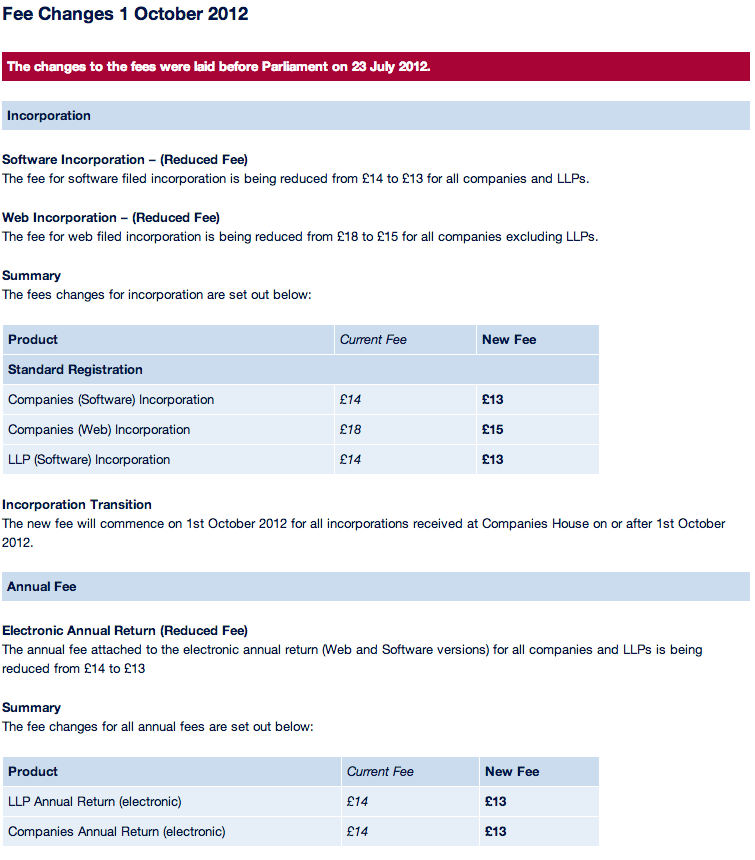 So now you can buy your licence to commit fraud for £13. Because right now that's what Companies House registers since it fails to undertake any of its basic tasks.

It does not demand or chase accounts.

It does not identify the ownership of companies.

It does not accurately record who the directors of companies are.

It does not ensure it receives information on changes in companies' membership or direction.

And it doesn't even ensure a proper address at which a company can be contacted is registered.

Worst of all, it strikes companies off the register without ever checking they are not trading, which just adds to the growth of the shadow economy.

This regulator is a disaster, and it's a disaster that's impacting on the real growth of our economy.

And what is really absurd is that all this has happened because of our stupid dedication to claiming there is 'light touch' regulation when what is needed is for the law to be upheld.

Just suppose all those fees went up to £30. Or even £50. Would anyone stop forming companies? No, of course not. But the cash would be available to chase those companies that do not comply with the law, and we'd all be better off as a result.

That's how easy it is to start putting matters right on company regulation. Now, who is going to support the idea?