MoneySavingExpert.com has run a poll on people's attitude to tax cheating in the light of Jimmy Carr's escapades. The results are fascinating, although of course not scientific as the sample was self selected from those with a bias to save money: 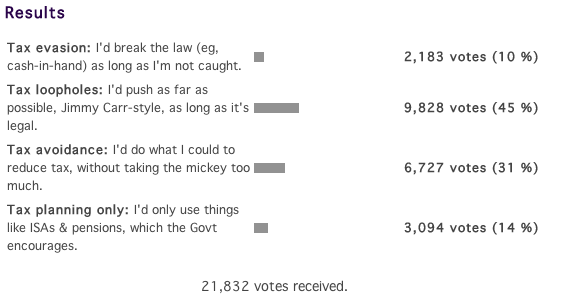 Oddly the stats match almost exactly a survey HMRC was inclined to quote a few years back that was undertaken in Canada. there they found 10% would cheat, 40% could be persuaded to comply and 50% would do so just about whatever happened. Here that's 10:45:45 (near enough).

What are the lessons? I have to say I think they're obvious. What is very clear is that people will only cheat if they think they will get away with it. So what we need are many more staff at HMRC to make sure people can't get away with it.

The solution is so simple it's amazing the government doesn't listen. Because they don't I have to come to the conclusion they want a deficit and to pretend we are in debt than is actually the case instead of wanting to tackle the tax gap to pay for the public services we all need.

If this survey shows anything it says this problem is self made by the government.