So, let's look at the data I used from HMRC for the current tax year to estimate the revenue HMRC raise from the 50p tax rate. This looked like this: 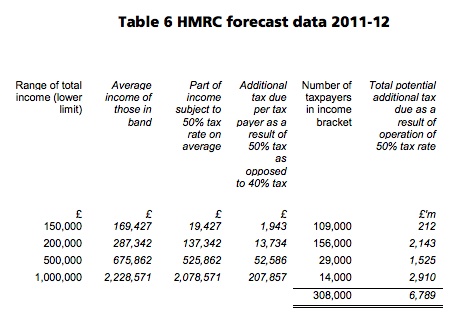 I stress, this is all based on HMRC data on income, taxpayers and what tax they pay.

Let me just concentrate on those earning over £1 million a year for a moment. They have an average of a bit over £2 million of income subject to the 50p tax and as the nad will be the same for the 45p rate (with fewer allowance offsets permitted) the income will be near enough the same for that rate.

Now how come in that case the tax lost is just £100 million according to HMRC, the government and OBR unless someone is telling the most amazing porkies.

Take the rest into account and the oss is liklely to be £3 billion.

Rarely have we had a budget where such a large lie has been told by someone in such high office for the sake of giving so significant a tax cut to so few.