No, you didn’t read that incorrectly. Cayman is  insolvent, bust, broke, unable to pay its debts.

This is not a rumour, this is fact. This fact is confirmed by the speaking notes used by the Hon. McKeeva Bush for a meeting held with senior Cayman civil servants, government boards and private sector business leaders last Thursday,  of which I seemed to be the first to  secure a copy. The text is here, but I will also reproduce it separately on my blog in case Cayman take it down.

The following summarises the current state of play, all revenue in Cayman Island Dollars, which have a fixed exchange rate of CI$1=US$1.2:

So desperate is the current crisis that the Caymans turned to the UK to cover September’s deficit, and have been politely told they may not borrow the necessary funds to pay wages and other commitments in that month. The letter saying so is here. It is also on my blog.

That means just one thing: Cayman is insolvent. It cannot pay its debts.

The UK has refused to lend the funds or let Cayman borrow because it does not believe it will cut government spending and it has seen no commitment by Cayman to raise taxes. And the UK makes it clear in no uncertain terms that is exactly what it thinks Cayman should do in the following key paragraphs: 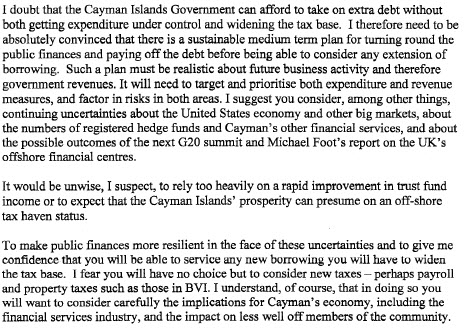 I have the impression the author enjoyed writing those paragraphs, but look at what he is saying:

It’s hard to see how much more could have been said to make clear that Cayman’s business model is dead.

So what are they proposing to do? Unbelievably all proposed taxes are on ordinary people in Cayman:

That is grossly unfair on the poor in Cayman (the very people the UK says should be protected), shows no real broadening of the tax base but does, most of all, look like rearranging the deck chairs as the ship is sinking. Which is extraordinary by itself in two ways. First, for a place supposedly so clever this is a remarkably poor list of initiatives, and second it does of course say yet again that the vested interest of wealth is being protected.

The odd thing is that is not possible in this situation. If Cayman really is insolvent, and that seems likely, then it is very clear that law and order may fail, property rights may not be protected, and so on. Wealth, in other words, is under real threat and such is the size of Cayman activity I doubt much of it can get out in a hurry without causing massive instability.

So this really is a crisis at the heart of the whole tax haven / secrecy jurisdiction system. The totem of the offshore location is seeing its business model fail, and with it the whole edifice of offshore — including the whole hedge fund edifice that claims to be built around this small island, could fall with it.

This could be a Lehman scale failure.

Watch this unfold: if London sticks to its guns (and it should) then Cayman is over as a tax haven — as they themselves predict. The fall out will be enormous. The whole hidden economy could fall apart with it — and do not think that will not have onshore ramifications, because it will.