I reserve the right to call fascists what they are, without fear 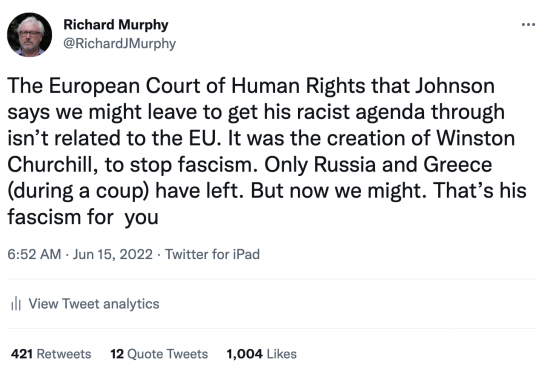 It is the latest suggestion that I have made that Johnson is a fascist, with reasons noted.

I also suggest that this is true of many of his MPs.

And because Johnson's views are those of his government I have suggested that those who support the Tories are also supporters of fascist policies.

In the face of evil I think it important to say so. I can, of course, justify the arguments made using academic sources if required but my actua logic for saying this is simple. I suggest that it is true that “The only thing necessary for the triumph of evil is for good men to do nothing.” And I do know that this was not apparently said by Edmund Burke, although it is routinely attributed to him. That is irrelevant: the statement is true whoever might have first said it. And I object to evil happening.

Despite this, the objections roll in, regularly. Yesterday this was posted on the blog:

Is it really the case thst professional bodies such as the ICAEW and academic institutions such as the Sheffield University Management school and Anglia Ruskin University don’t have any controls over their members / professors?

I know that, regardless of it being outside of my professional work, I would certainly be in trouble with my professional body if I was to make the fanatical, abusive and offensive claims that you publish on a regular basis.

Do they not monitor the content on your blog?

Let's just consider that for a moment. First, this person (and almost certainly a false name was used) wants my universities and professional bodies to limit my political freedom of speech.

And they want them to do so in order that fascism might happen.

As a result they suggest that my blog should be monitored to prevent me doing this. Well, at least we now know where cancel culture is happening.

It took me a long time and a lot of thought before I called Johnson and the Tories fascists. But that is what they are. And unless we describe them as such they will still con some people into believing they are John Major style Conservatives - when he is horrified by what they are doing, as are those MPs of more moderate mind that Johnson expelled from the Tory Party to let this happen.

So report me to whoever you like. I know full well that whoever you might report me to knows what I am doing: I hardly hide my opinions. And I reserve the right to call fascists what they are, without fear. That is what is necessary to oppose evil.