The ONS has published new GDP data for April this morning. This is bad news for the Chancellor’s claim to be creating growth, because the economy fell by 0.3% in April: 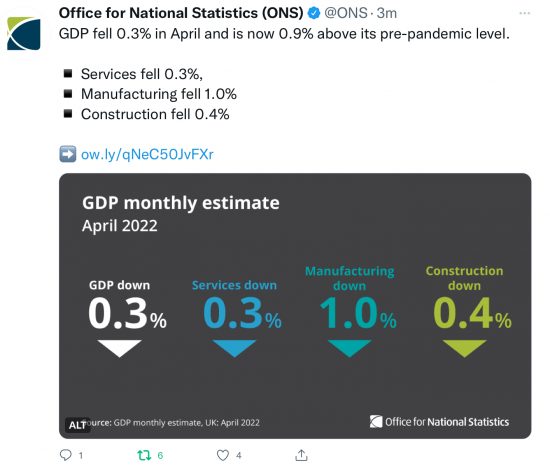 When the aim is positive news that is bad. It confirms three things.

The first is that, as Danny Blanchflower and I have been saying for some time, the UK economy is already in recession. This hardly seems worth debating any more.

The second is that the OECD growth forecast for this year, which I discussed on LBC last week, is wildly optimistic, as I said then.

Thirdky, the evidence from waking about us all that is needed to appraise economic reality: the state of the economy is apparent from people’s sentiments, and it is not going to get better soon.

But what does this mean? I suggest, firstly, that the Bank of England needs to stop increasing interest rates now, and even cut them unless stagflation, destroyed hopes and destroyed livelihoods really are its goals, as I fear they might be.

Second, this is the time for more government spending not less.

But third, that spending must be in the economic transition that we need i.e. the Green New Deal.

With Colin Hines I have already explained the funding.

Now is the time for action, but the government’s plan is to cut the civil service by twenty per cent, which is going to make the whole situation very much worse. Things can only get worse from here with the Tories in control.