Solving the problem of excessive government interest payments to banks: just issue them with some £10 million pound coins

Yesterday John Warren posted a thought experiment on the blog. Following an introduction that is worth reading but which I will not repeat here he said:

Here is the thought experiment, and the question. It is very simple. What would happen if the Government decided to print £1Trn of crisp new notes in all the denominations; but – crucially – didn’t circulate it: just placed it in the (empty and convenient) vaults in Threadneedle Street; the fiat equivalent of Gold. How would that appear in the accounts of government and BofE, and what happens to the recording of the National Debt. How does the balance sheet look now? We could vary the terms; print a single £1Trn bank-note, then we know it will never circulate (that variant was put to me by a young economist – who has broken free from the conventional wisdom).

My immediate thought is that this is a variant on the trillion-dollar coin suggestion from Krugman and others in the USA.  I think the variant is really important, including in this case. There are two reasons for that.

First, technically £1 trillion of banknotes not issued do not represent debt: they are simply a prepaid cost of the manufacture of tokens of debt that might be issued. As such the double entry is credit manufacturing cost in the income account, debit stock and work in progress on the Bank of England balance sheet, with that debt retaining value until the note design ceases to be used, when this stock will become worthless. I suggest that the printing has no consequence at all until issued simply because there is no liability on the balance sheet. And that is important: what it says is that the Bank of England is, like any bank, unable to create money without third-party involvement [see footnote].

However, the Treasury can and does creates coins with value when minted through its subsidiary the Royal Mint and I think it can be successfully argued that they are not in the official money supply figures, although acknowledged by the Bank of England as base currency. This is because coin (and there are only £4.2 billion worth in existence) are not accounted for as liabilities whilst in contrast notes most definitely are in the national debt, if only via the Bank of England net contribution to that debt. I should add that I have tried to get straight answers on both these issues from HM Treasury, the BoE, and ONS, without any success from any of them. But, the evidence from the accounting is I think unambiguously what I have suggested.

I should, having said so, make clear that how the Treasury accounts for the surplus / loss on coin creation is unclear in its accounts, largely because after routine manufacturing costs for the current coins in issue the net sum might be very small, but the accounting for their issue can, for those willing to pursue the point, be found in the Consolidated Fund Accounts. This is from them for 2021: 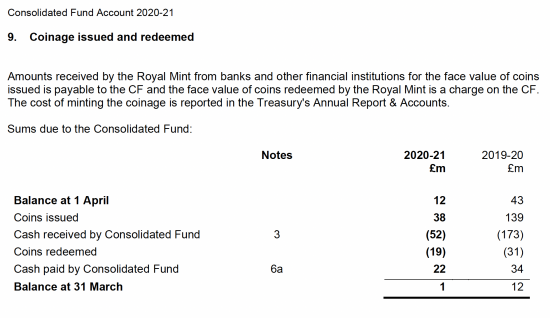 The essential point here is that the value of the coins issued were income in the Consolidated Fund: 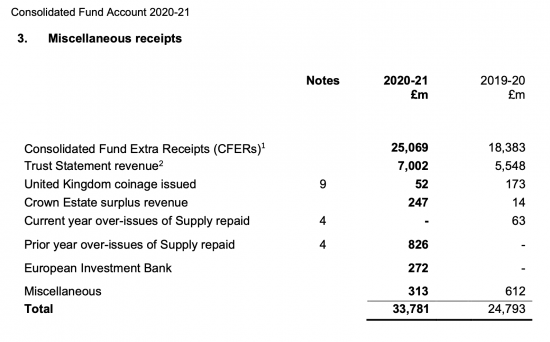 There is therefore a debt with the Bank of England - the Consolidated fund balance increased.

But where, after costs of issue, does the profit in the Treasury go? A credit in the income statement has to have a balance sheet consequence after all. There is no indication I can find of that: the net sum is probably too small to require disclosure, in fairness (and to confuse matters the cost of creating the money is confusingly in the Treasury's accounts). And yet this is the age-old seignorage - the profit that goes to the coin creator from turning metal into coin, and it does exist. It would most definitely exist if a £1 trillion coin was created.

As noted above, the value of that coin would be recorded as income in the Consolidated Fund - which is a trust account of the Treasury, and so part of government funding. Base money would increase by £1 trillion as a result. But where does that £1 trillion credit in the income statement of the consolidated fund flow to on the balance sheet? It can't go to liabilities because there is already a credit in the income statement, so the only place it can go is to the Reserves of HM Treasury. And meanwhile, the Bank of England would simply record it as a banking transaction.

The additional interesting point is that as far as I can see this gain does not fall out on consolidation of the accounts. When that takes place there is a debit left from the Bank of England accounts, which is  to base money, and a credit to government reserves. I will happily be shown to be wrong. But in the time I have had available that appears to be the accounting result of this.

And what of that credit in the reserves of the Whole of Government Accounts? That is then properly described as the 'national capital'. That is, it is the value injected by the government into the economy for the public good. But what the government does not have to do is then pay anyone for the privilege of having done the right thing for society.

Finally, does this prevent monetary policy using changing interest rates to be transmitted into the economy via the CBRAs?  It does not. Remember, this worked in 2008 when the balances were around £40 billion. Near enough £900 billion is not required for this purpose now. Maybe £100 billion would be sufficient for that reason. It is hard to imagine more than £200 billion is required. Interest on all the excess is saved. That’s quite something in terms of economic justice, and all for issuing some coins.

So is this the Krugman trick? I suggest not. That was intended to cancel debt. This does not. It recognises QE cancelled gilts and redenominates the central bank reserve accounts, for sure, but the aim is different. The aim is to cancel interest payments and to recognise capital. I don’t see that as the Krugman goal, and suggest this is in any case better as it reflects what actually happens, simply repricing it.